Items related to THE GRAND INQUISITOR'S MANUAL: A History of Terror...

Home Kirsch, Jonathan THE GRAND INQUISITOR'S MANUAL: A History of Terror in the Name ...
Stock Image 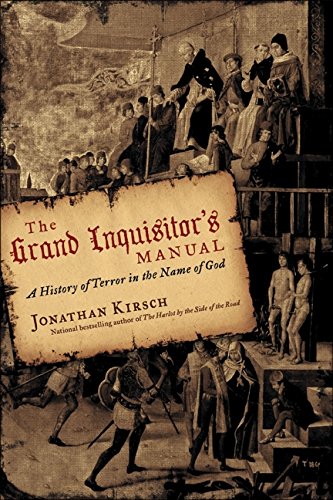 THE GRAND INQUISITOR'S MANUAL: A History of Terror in the Name of God

Signed by author on title page in black fountain ink. Author of THE HARLOT BY THE SIDE OF THE ROAD, GOD AGAINST THE GODS, MOSES, and A HISTORY OF THE END OF THE WORLD, among others. Fine, unread first edition, first printing, in fine, mylar-protected dust jacket.{Not remainderr-marked or price-clipped} NF49. Bookseller Inventory # 020300

Title: THE GRAND INQUISITOR'S MANUAL: A History of ...

The Grand Inquisitor’s Manual by nationally bestselling author Jonathan Kirsch is a provocative popular history of the Inquisition, the 12th century reign of church-sanctioned terror. Ranging from the Knights Templar to the first Protestants, from Joan of Arc to Galileo, The Grand Inquisitor’s Manual is a fascinating and sobering study of the torture and murder of hundreds of thousands of “heretics” in God’s name—the original blueprints for persecution originally drafted in the Middle Ages but followed for centuries afterwards, up to and including the “advanced interrogation methods” recently employed at Guantanamo Bay.

"The inquisitorial apparatus that was first invented in the Middle Ages remained in operation for the next six-hundred years, and it has never been wholly dismantled. As we shall see, an unbroken thread links the friar-inquisitors who set up the rack and the pyre in southern France in the early thirteenth century to the torturers and executioners of Nazi Germany and Stalinist Russia in the mid-twentieth century. Nor does the thread stop at Auschwitz or the Gulag; it can be traced through the Salem witch trials in the Massachusetts Bay Colony, the internment of Japanese-Americans during World War II, the Hollywood blacklists of the McCarthy era, and even the interrogation cells at Abu Ghraib and Guantanamo."

The twelfth century birthed a new and sinister brand of sanctioned terror, an international network of secret police and courts, an army of inquisitors whose sworn duty was to seek out anyone regarded as an enemy, and a casualty list numbering in the tens of thousands. The original agents of the Inquisition—priests and monks, scribes and notaries, attorneys and accountants, torturers and executioners—were deputized by the Church and their worst excesses were excused as the pardonable sins of soldiers engaged in a holy war against heresy that became the obsession of Christendom. Yet the first rumblings of Western civilization's great engine of persecution provided no indication of the ultimate scope and influence of the inquisitorial toolkit and how the crimes of the first inquisitors were perpetrated again and again into the twentieth century and beyond. Despite the importance of this legacy, the history of the Inquisition remains a subject that has largely been overlooked by general historians.

With The Grand Inquisitor's Manual, national bestselling author Jonathan Kirsch delivers a sweeping and provocative history that explores how the Inquisition was honed to perfection and brought to bear on an ever-widening circle of victims by authoritarians in both church and state for over six hundred years. Ranging from the Knights Templar to the first Protestants, from Joan of Arc to Galileo; from the torture and murder of hundreds of thousands of innocent women during the Witch Craze to its greatest power in Spain after 1492, when the secret tribunals and torture chambers were directed for the first time against Jews and Muslims to the modern war on terror—Kirsch shows us how the Inquisition stands as a universal and ineradicable symbol of the terror that results when absolute power works its corruptions.

The history of the Inquisition is draped in myth and mystery, a favorite theme of both artists and propagandists throughout the six hundred years of its active operations. Yet when we pull aside the veil, what we see are the original blueprints for the machinery of persecution that was invented in the High Middle Ages and applied to human flesh ever since. The Grand Inquisitor's Manual exposes the dangerous circular logic of the Inquisition so that we do not perpetuate its brand of terror.