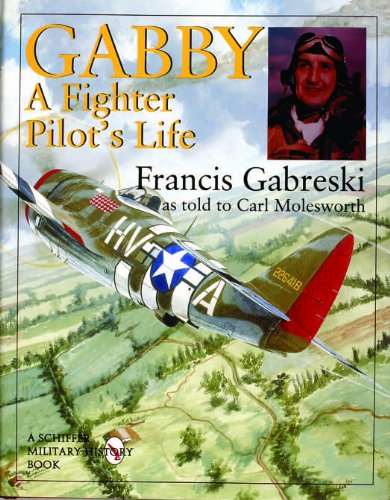 Synopsis: If ever a man has earned his place in the annals of military history, that man is Francis Gabby Gabreski. His exploits as a fighter pilot in World War II and Korea are legendary; his rise from humble beginnings to success in military and business career

From Kirkus Reviews: The low-key memoir of an American fighter pilot who achieved ace status in two wars. Gabreski, the son of Polish immigrants who settled in Pennsylvania, nearly flunked out of Notre Dame but was nonetheless recruited by the Army Air Corps. In 1941, he was posted to Hawaii, where he lived through the attack on Pearl Harbor. Eager for action, Gabreski talked the Pentagon into assigning him to a Polish RAF squadron in England; he subsequently became the ETO's top ace, with 28 confirmed kills in 17 months of aerial combat. On the day the author was scheduled to return home to a hero's welcome, he flew one last mission and was shot down--and spent the last ten months of WW II behind the wire of a POW camp. Back in the States before V-J Day, Gabreski married his longtime sweetheart and left the military for a sales job at Douglas Aircraft. After almost two years of civilian life, however, he reenlisted with the rank of lieutenant colonel. Following a brief sojourn as a test pilot, Gabreski was sent to Korea in 1951 as a wing commander. Flying F-86 Sabrejets, he was credited with downing more than six enemy planes, making him a double ace. Retiring in 1967 as a full colonel, the author accepted an executive post with Grumman, where (save for a hectic two-year stint as the politically appointed president of the Long Island Railroad) he remained for the next 20 years. Gabreski devotes most of his understated text to matter-of- fact accounts of his combat experiences, leaving readers to speculate on just what made him such a deadly dogfighter. There's also a rather full roll call of erstwhile comrades in arms, most of whom add little to the narrative. These cavils apart, an often ingratiating memoir. (Sixteen pages of photographs--not seen.) -- Copyright ©1991, Kirkus Associates, LP. All rights reserved.

Book Description Schiffer Publishing, Limited. Hardcover. Condition: Very Good. A copy that has been read, but remains in excellent condition. Pages are intact and are not marred by notes or highlighting, but may contain a neat previous owner name. The spine remains undamaged. At ThriftBooks, our motto is: Read More, Spend Less. Seller Inventory # G0764304429I4N00

Book Description Schiffer Publishing, Ltd., 1998. Hardcover. Condition: Good. Connecting readers with great books since 1972. Used books may not include companion materials, some shelf wear, may contain highlighting/notes, may not include cdrom or access codes. Customer service is our top priority!. Seller Inventory # S_280199464

Book Description Schiffer Publishing, Ltd., 1998. Condition: Good. A+ Customer service! Satisfaction Guaranteed! Book is in Used-Good condition. Pages and cover are clean and intact. Used items may not include supplementary materials such as CDs or access codes. May show signs of minor shelf wear and contain limited notes and highlighting. Seller Inventory # 0764304429-2-4