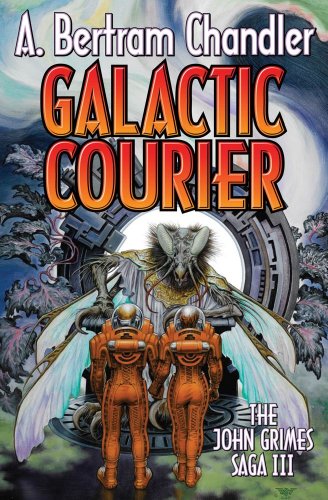 Synopsis: The #3 omni edition of the classic science fiction of A. Bertram Chandler’s John Grimes books, with multiple interrelated stories and two full novels in this renowned SF saga.  Pipe-smoking, action-loving spaceship commander John Grimes (think Captain Kirk with more of a navy, salty attitude) retires from heroic days in Earth’s space navy to become a merchant captain extraordinaire and a force to reckon with on the galactic frontier and in a series of dangerous alternate realities.

Number three in a three-volume collection of the legendary John Grimes of the Galactic Rim series. Classic Star Trek meets the high seas. If space travel is going to be anything like sailing the oceans, then A. Bertram Chandler has surely caught its absolute essence in his Grimes novels. Here are the crowning tales of Grimes' career – the Grimes “Rim Commodore” stories. In these tales, Grimes has found his true calling out on the edge of galactic civilization. He’s the sheriff of a realm where pioneer colonies and parallel dimensions overlap, and a starship captain must be prepared for adventure in ALL possible worlds.

Includes an astounding (as in, mostly published in Astounding and Analog by legendary editor John W. Campbell) cornucopia of Grimes novels bringing together all previous Commodore Grimes tales in Star Courier, To Keep the Ship, Matilda’s Stepchildren, Star Loot.

About A. Bertram Chandler and the John Grimes series:
“SF’s answer to Horatio Hornblower.” —Publishers Weekly

“As Asimov chronicled the Foundation, as Heinlein built his Future History, so Chandler constructs the epic of the Rim Worlds.” —Analog

“[Grimes] establishes a loyalty in his readers rather similar to that felt by readers of Hornblower. Indeed [Chandler’s] space operas are among the most likeable and well constructed in the genre. . . .” —The Encyclopedia of Science Fiction

About the Author: A. Bertram Chandler was an Australian SF master who filled magazines such as Astounding  with adventure and space opera extraordinaire during the 1960s and 1970s. He was a favorite of legendary editor John W. Campbell and was a merchantman seaman commanding various ships in the Australian and New Zealand navies during much of his early life—a background Chandler puts to full use in his John Grimes stories.

Book Description Baen, 2011. Condition: Good. Original. Shows some signs of wear, and may have some markings on the inside. Seller Inventory # GRP70852449

Book Description Baen Books. Paperback. Condition: Very Good. A copy that has been read, but remains in excellent condition. Pages are intact and are not marred by notes or highlighting, but may contain a neat previous owner name. The spine remains undamaged. At ThriftBooks, our motto is: Read More, Spend Less. Seller Inventory # G1451637632I4N00

Book Description Baen, 2011. Condition: Good. A+ Customer service! Satisfaction Guaranteed! Book is in Used-Good condition. Pages and cover are clean and intact. Used items may not include supplementary materials such as CDs or access codes. May show signs of minor shelf wear and contain limited notes and highlighting. Seller Inventory # 1451637632-2-4

Book Description Baen, 2011. Paperback. Condition: VERY GOOD. Pages are intact and are not marred by notes or highlighting, but may contain a neat previous owner name. The spine remains undamaged. Seller Inventory # 1451637632_abe_vg

Book Description Baen, 2011. Paperback. Condition: GOOD. Has little wear to the cover and pages. Contains some markings such as highlighting and writing. Seller Inventory # 1451637632_abe_gd

Book Description Baen, 2011. Paperback. Condition: Good. Book shows common (average) signs of wear and use. Binding is still tight. Covers are intact but may be repaired. We have 1.5 million books to choose from -- Ship within 24 hours -- Satisfaction Guaranteed!. Seller Inventory # mon0000726914

Book Description Baen Books, 2011. Paperback. Condition: Used; Good. **SHIPPED FROM UK** We believe you will be completely satisfied with our quick and reliable service. All orders are dispatched as swiftly as possible! Buy with confidence!. Seller Inventory # 3424483

Shipping: US$ 19.51
From United Kingdom to U.S.A.
Destination, rates & speeds