Items related to Game of Thrones 5-Copy Boxed Set: A Song of Ice and... 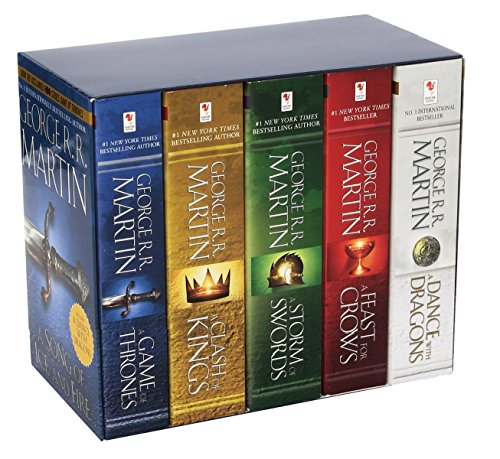 AbeBooks Seller Since May 10, 2010 Seller Rating

Quantity available: 2
View all  copies of this book
Buy Used
Price: US$ 25.81 Convert Currency
Shipping: US$ 7.24 From Germany to U.S.A. Destination, rates & speeds
Add to basket

For the first time, all five novels in the epic fantasy series that inspired HBO's "Game of Thrones "are together in one boxed set. An immersive entertainment experience unlike any other, A Song of Ice and Fire has earned George R. R. Martin--dubbed "the American Tolkien" by "Time" magazine--international acclaim and millions of loyal readers. Now here is the entire monumental cycle: A GAME OF THRONES A CLASH OF KINGS A STORM OF SWORDS A FEAST OF CROWS A DANCE WITH DRAGONS

George R. R. Martin is the #1 New York Times bestselling author of many novels, including the acclaimed series A Song of Ice and Fire—A Game of Thrones, A Clash of Kings, A Storm of Swords, A Feast for Crows, and A Dance with Dragons—as well as Tuf Voyaging, Fevre Dream, The Armageddon Rag, Dying of the Light, Windhaven (with Lisa Tuttle), and Dreamsongs Volumes I and II. He is also the creator of The Lands of Ice and Fire, a collection of maps from A Song of Ice and Fire featuring original artwork from illustrator and cartographer Jonathan Roberts, and The World of Ice & Fire (with Elio M. García, Jr., and Linda Antonsson). He lives with the lovely Parris in Santa Fe, New Mexico.