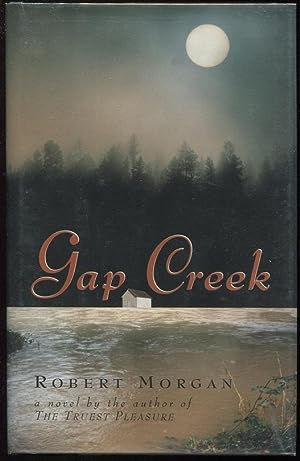 AbeBooks Seller Since May 9, 2012 Seller Rating

An unflinching tale of turn-of-the-century Appalachian life, Gap Creek chronicles the challenging first year in the marriage of Julie Harmon and Hank Richards. After losing both her father and brother before turning 17, Julie faces fire, flood, grifters, sickness, and starvation with grim determination and remarkable stamina. By capturing the earthy details of rural life, including raw, riveting accounts of everything from hog slaughtering to childbirth, Robert Morgan weaves the human and the heroic that coexist in every individual.

Oprah Book Club® Selection, January 2000: Robert Morgan's Gap Creek opens with one wrenching death and ends with another. In between, this novel of turn-of-the-century Appalachian life works in fire, flood, swindlers, sickness, and starvation--a truly biblical assortment of plagues, all visited on the sturdy shoulders of 17-year-old Julie Harmon. "Human life don't mean a thing in this world," she concludes. And who could blame her? "People could be born and they could suffer, and they could die, and it didn't mean a thing.... The world was exactly like it had been and would always be, going on about its business." For Julie, that business is hard physical labor. Fortunately, she's fully capable of working "like a man"--splitting and hauling wood, butchering hogs, rendering lard, planting crops, and taking care of the stock. Even when Julie meets and marries handsome young Hank Richards, there's no happily-ever-after in store. Nothing comes easy in Julie Harmon's world, and their first year together is no exception.

Throughout the novel, Morgan chronicles Julie's trials in prose of great dignity and clarity, capturing the rhythms of North Carolina speech by using only the subtlest of inflections. Clearly the author has done his research too--the descriptions of physical labor practically leap off the page. (Suffice to say, you'll learn far more about hog slaughtering than you ever dreamed of knowing.) Yet he resists the temptation to make his long-suffering characters into saints. Julie simmers with resentment at being her family's workhorse, and Hank flies into a helpless rage whenever he feels that his authority is questioned. In novels like The Truest Pleasure and The Hinterlands, Morgan proved his ability to create memorable heroines. In Gap Creek, he writes with great feeling--but not a touch of sentimentality--about a life Julie aptly calls "both simple and hard."


We guarantee the condition of every book as it's described on the Abebooks web sites. If you're dissatisfied with your purchase (Incorrect Book/Not as Described/Damaged) or if the order hasn't arrived, you're eligible for a refund within 30 days of the estimated delivery date. If you've changed your mind about a book that you've ordered, it may be returned for a full refund (less shipping costs) so long as we are notified of the return within 7 calendar days of delivery.

We may be contacted by m...