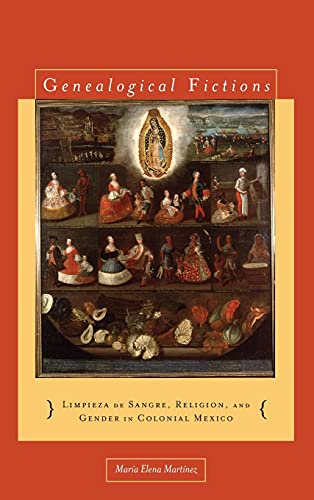 Synopsis: María Elena Martínez's Genealogical Fictions is the first in-depth study of the relationship between the Spanish concept of limpieza de sangre (purity of blood) and colonial Mexico's sistema de castas, a hierarchical system of social classification based primarily on ancestry. Specifically, it explains how this notion surfaced amid socio-religious tensions in early modern Spain, and was initially used against Jewish and Muslim converts to Christianity. It was then transplanted to the Americas, adapted to colonial conditions, and employed to create and reproduce identity categories according to descent. Martínez also examines how the state, church, Inquisition, and other institutions in colonial Mexico used the notion of purity of blood over time, arguing that the concept's enduring religious, genealogical, and gendered meanings and the archival practices it promoted came to shape the region's patriotic and racial ideologies.

About the Author: María Elena Martínez is Associate Professor of History and American Studies and Ethnicity at the University of Southern California.

Book Description Stanford University Press, 2008. Hardcover. Condition: Acceptable. No dust jacket, book is in good condition Item is intact, but may show shelf wear. Pages may include notes and highlighting. May or may not include supplemental or companion material. Access codes may or may not work. Connecting readers since 1972. Customer service is our top priority. Seller Inventory # mon0002078855

Book Description Stanford University Press. Hardcover. Condition: Good. A copy that has been read, but remains in clean condition. All pages are intact, and the cover is intact. The spine may show signs of wear. Pages can include limited notes and highlighting, and the copy can include previous owner inscriptions. At ThriftBooks, our motto is: Read More, Spend Less. Seller Inventory # G0804756481I3N00

Book Description Brand: Stanford University Press, 2008. Hardcover. Condition: GOOD. Has little wear to the cover and pages. Contains some markings such as highlighting and writing. Supplemental materials are not guaranteed with any used book purchases. Seller Inventory # 0804756481_abe_gd

Book Description Stanford University Press, 2008. Condition: Good. A+ Customer service! Satisfaction Guaranteed! Book is in Used-Good condition. Pages and cover are clean and intact. Used items may not include supplementary materials such as CDs or access codes. May show signs of minor shelf wear and contain limited notes and highlighting. Seller Inventory # 0804756481-2-4

Book Description Brand: Stanford University Press, 2008. Hardcover. Condition: VERY GOOD. Pages are intact and are not marred by notes or highlighting, but may contain a neat previous owner name. The spine remains undamaged. Supplemental materials are not guaranteed with any used book purchases. Seller Inventory # 0804756481_abe_vg

There are 16 more copies of this book