Items related to Geography Of Bliss 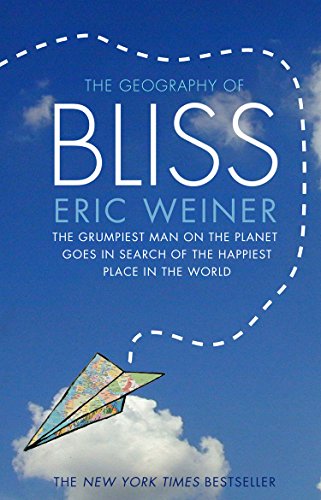 Quantity: 2
View all  copies of this book
Buy New
Price: US$ 14.98 Convert Currency
Shipping: US$ 13.79 From United Kingdom to U.S.A. Destination, rates & speeds
Add to basket

What makes a nation happy? Is one country's sense of happiness the same as another's? In the last two decades, psychologists and economists have learned a lot about who's happy and who isn't. The Dutch are, the Romanians aren't, and Americans are somewhere in between...After years of going to the world's least happy countries, Eric Weiner, a veteran foreign correspondent, decided to travel and evaluate each country's different sense of happiness and discover the nation that seemed happiest of all.Eric Weiner discovers the relationship between money and happiness in tiny and extremely wealthy Qatar (and it's not a good one). He goes to Thailand, and finds that not thinking is a contented way of life. He goes to the tiny Himalayan kingdom of Bhutan, and discovers they have an official policy of Gross National Happiness! He asks himself why the British don't do happiness? In Weiner's quest to find the world's happiest places, he eats rotten Icelandic shark, meditates in Bangalore, visits strip clubs in Bangkok and drinks himself into a stupor in Reykjavik. Full of inspired moments, "The Geography of Bliss" accomplishes a feat few travel books dare and even fewer achieve: to make you happier.

Eric Weiner, an award-winning foreign correspondent for NPR and a former reporter for the New York Times, has written stories from more than three dozen countries, including Iraq, Afghanistan, and Indonesia. His commentary has appeared in The New Republic, The International Herald Tribune, and The Los Angeles Times, and he writes the popular "How They Do It" column for Slate. He has lived in New Delhi, Jerusalem and Tokyo.