Home Friedrich von Bernhardi Germany and the Next War 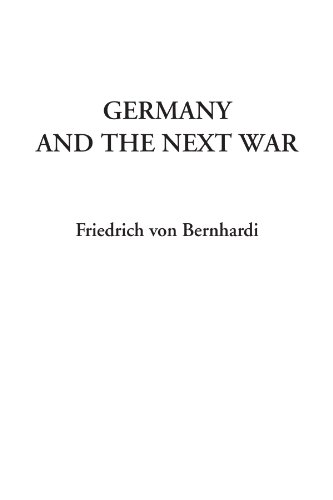 Germany and the Next War

This work has been selected by scholars as being culturally important, and is part of the knowledge base of civilization as we know it. This work was reproduced from the original artifact, and remains as true to the original work as possible. Therefore, you will see the original copyright references, library stamps (as most of these works have been housed in our most important libraries around the world), and other notations in the work.

This work is in the public domain in the United States of America, and possibly other nations. Within the United States, you may freely copy and distribute this work, as no entity (individual or corporate) has a copyright on the body of the work.

As a reproduction of a historical artifact, this work may contain missing or blurred pages, poor pictures, errant marks, etc. Scholars believe, and we concur, that this work is important enough to be preserved, reproduced, and made generally available to the public. We appreciate your support of the preservation process, and thank you for being an important part of keeping this knowledge alive and relevant.

About the Author: Bernhardi was born in St. Petersburg, Russian Empire. His family immigrated to Schöpstal, Silesia in 1851. During the Franco-Prussian War (1870–71), Bernhardi was a cavalry lieutenant in the 14th Hussars of the Prussian Army, and at the end of that conflict had the honor of being the first German to ride through the Arc de Triomphe when the Germans entered Paris. From 1891 to 1894, he was German military attaché at Bern and was subsequently head of the military history department of the Grand General Staff in Berlin. He was appointed general in command of the VII Army Corps at Münster in Westphalia in 1907, but retired two years later and busied himself as a military writer. Widespread attention was excited by the memoirs of his father, the diplomatist and historian Theodor von Bernhardi, which he published, and still more by his book Germany and the Next War. In Germany and the Next War, Bernhardi stated that war "is a biological necessity," and that it was in accordance with "the natural law, upon which all the laws of Nature rest, the law of the struggle for existence." Bernhardi served during World War I as a general. He fought with success first in the Eastern Front on the Stochod, where he stormed the bridgehead of Tsarecze, and afterwards on the Western Front, in particular at Armentières. He was awarded the Pour le Mérite on 20 August 1916, for his participation in the German defense against the Brusilov Offensive.

1. Germany and the Next War