Items related to How I Get Through Life: A Wise and Witty Guide

Home Charles Grodin How I Get Through Life: A Wise and Witty Guide
Stock Image 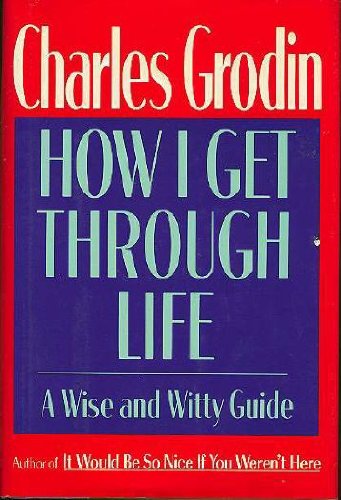 How I Get Through Life: A Wise and Witty Guide

Title: How I Get Through Life: A Wise and Witty ...

The acclaimed actor, writer, producer, and director tells how he navigates the ups and downs of show business and family life, including such problems as parents, jobs, sex, money, children, friendship, gossip, and more. National ad/promo. Tour.

Actor and sometime author Grodin, droll to the brink of dull, presents some afterthoughts to his previous outing (It Would Be So Nice If You Weren't Here, 1989). In miniature essays, evidently written in airports and hotel rooms, Grodin offers his Philosophy of Life, step by pedestrian step. Judging from his vagrant musings, he's a nice guy in a tough world. The inspirational little pieces tend to sound like a peculiar blend of ``Dale Carnegie Goes to Hollywood (After His Bar Mitzvah)'' and sound bites from Dame Edna Everage. With his classic straight-faced delivery, Grodin, on the topic of ``being friendly,'' wonders: ``What must your average man and woman, who weren't in the movies, [have felt] if I, who was playing leading roles in movies, felt less than well treated?'' His notions are not likely to start controversy. On etiquette: ``I'd rather people just be nice and let it go at that.'' On criticism: ``If we could change half the things wrong with us, the world would be a noticeably better place.'' There are, to be sure, certain revelations befitting a celebrity's work. For example, Grodin tried writing for Michael Dukakis. And he gets all his clothes from the wardrobe department, either free or at half price (``It depends on how they feel about me when the movie's over''). Braggarts, litigation, and ``classical Muzak'' drive the author ``nuts.'' On the other hand, he is forthrightly in favor of honesty, understanding, and, generally speaking (which is his way), goodness. It's all quite affable, and one must have a genial regard for a writer who ingenuously declares that ``Nobody's perfect, especially me and you, so let's not sweat the small stuff.'' Likely to be charmingly promoted on the talk-show circuit, this performance by a fair-to-middling raconteur is what, in the old days of the movies, would have been called a ``programmer'': pleasant enough, but no Academy Award nominee. -- Copyright ©1992, Kirkus Associates, LP. All rights reserved.