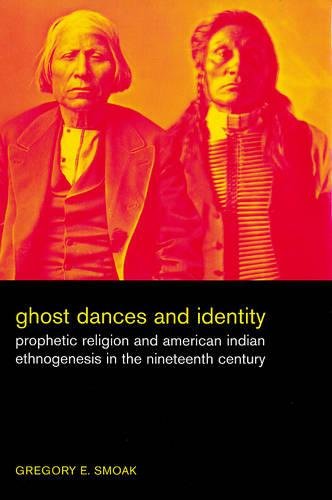 Synopsis: This innovative cultural history examines wide-ranging issues of religion, politics, and identity through an analysis of the American Indian Ghost Dance movement and its significance for two little-studied tribes: the Shoshones and Bannocks. The Ghost Dance has become a metaphor for the death of American Indian culture, but as Gregory Smoak argues, it was not the desperate fantasy of a dying people but a powerful expression of a racialized Indianness.” While the Ghost Dance did appeal to supernatural forces to restore power to native peoples, on another level it became a vehicle for the expression of meaningful social identities that crossed ethnic, tribal, and historical boundaries. Looking closely at the Ghost Dances of 1870 and 1890, Smoak constructs a far-reaching, new argument about the formation of ethnic and racial identity among American Indians. He examines the origins of Shoshone and Bannock ethnicity, follows these peoples through a period of declining autonomy vis-a-vis the United States government, and finally puts their experience and the Ghost Dances within the larger context of identity formation and emerging nationalism which marked United States history in the nineteenth century.

From the Inside Flap: " This is a compellingly nuanced and sophisticated study of Indian peoples as negotiators and shapers of the modern world."—Richard White, author of The Middle Ground: Indians, Empires, and Republics in the Great Lakes Region, 1650-1815

Book Description University of California Press, 2006. Condition: Good. A+ Customer service! Satisfaction Guaranteed! Book is in Used-Good condition. Pages and cover are clean and intact. Used items may not include supplementary materials such as CDs or access codes. May show signs of minor shelf wear and contain limited notes and highlighting. Seller Inventory # 0520246586-2-4

Book Description University of California Press, 2006. Hardcover. Condition: VERY GOOD. Pages are intact and are not marred by notes or highlighting, but may contain a neat previous owner name. The spine remains undamaged. Supplemental materials are not guaranteed with any used book purchases. Seller Inventory # 0520246586_abe_vg

Book Description University of California Press 2006-02-15, 2006. Hardcover. Condition: Very Good. Item is in very good condition. If supplemental codes/CDs for textbooks are required please contact us prior to purchasing as they may be missing. Seller Inventory # DS-0520246586-2