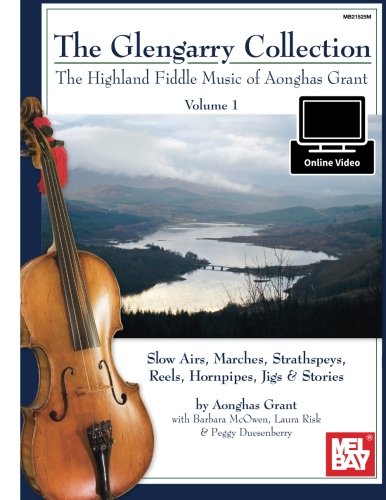 Synopsis: The Glengarry Collection contains 164 Slow Airs, Marches, Strathspeys, Reels, Jigs and Hornpipes with Stories, History and Photographs. It focuses on the core of Aonghas’ music: Highland fiddling, with its links to pipe tunes and Gaelic songs. Some of these tunes have never been published before, while others are available only in out-of-print books or in pipe settings, and the collection also includes a number of tunes composed by Aonghas himself, and tunes composed in honor of Aonghas. The tunes are fully chorded in a style appropriate to Aonghas’ band experience. All these are richly illustrated by transcriptions of Aonghas’ bowings, grace-notes, stories, and photos of scenes and people from Aonghas’ varied life careers, including old family photos. Finally, there is an accompanying video of Aonghas’ impromptu and passionate performances of 61 of the tunes in the collection. Video download available online.

About the Author: Aonghas Grant is widely recognized as one of the most important living exponents of Scottish Highland fiddling, a style that has been significantly influenced by the associated traditions of Gaelic song and Highland piping. Born in 1931, Aonghas was raised in the West Highlands: his father s family had lived in the Glengarry region for generations. In addition to this legacy of Highland tradition, Aonghas has also been involved in many of the significant changes and trends in Scottish traditional music during his lifetime, and he is always keen to learn new tunes from many sources. In Aonghas young days, formal fiddle teaching was unknown in the Highlands. His own informal learning was more typical, and he had never thought to give lessons or classes himself until Tom Anderson invited him to teach at the University of Stirling Heritage of Scotland Summer School in 1979. In over 20 years of teaching at this two-week residential course, Aonghas enjoyed meeting a variety of musicians and hearing their tunes, and he learned much more about written music. Aonghas has also taught at various summer schools in North America. Closer to home, he has been involved in the highly successful Fèisean movement and currently teaches private students at his home in Lochyside. In 1996, he began teaching undergraduate fiddle students at the Royal Scottish Academy of Music and Drama in Glasgow, starting with Allan Henderson, Iain MacFarlane and Sharon Hassan. Aonghas work as a teacher, along with his own playing, has made an important contribution to the flourishing Highland music scene today. Barbara McOwen was encouraged by Scottish country dancers in the San Francisco area in 1971 to play for dancing. She drew on her dancing and music experience, her library of books and recordings, her A.B. in Music from the University of California at Berkeley, and the growing local folk music community, and formed a band, The Berkeley Scottish Players, which exposed a number of dancers and musicians to the Scottish repertoire. The band recorded three landmark LPs during the 1970s. After moving to Boston in 1979, Barbara established the dance band Tullochgorum and co-founded several community Scottish music ensembles and the Boston Harbor Scottish Fiddle School.