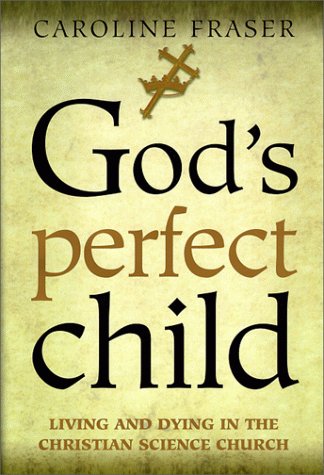 Synopsis: From a former Christian Scientist, the first unvarnished account of one of America's most controversial and little-understood religious movements.

Millions of americans-from Lady Astor to Ginger Rogers to Watergate conspirator H. R. Haldeman-have been touched by the Church of Christ, Scientist. Founded by Mary Baker Eddy in 1879, Christian Science was based on a belief that intense contemplation of the perfection of God can heal all ills-an extreme expression of the American faith in self-reliance. In this unflinching investigation, Caroline Fraser, herself raised in a Scientist household, shows how the Church transformed itself from a small, eccentric sect into a politically powerful and socially respectable religion, and explores the human cost of Christian Science's remarkable rise.

Fraser examines the strange life and psychology of Mary Baker Eddy, who lived in dread of a kind of witchcraft she called Malicious Animal Magnetism. She takes us into the closed world of Eddy's followers, who refuse to acknowledge the existence of illness and death and reject modern medicine, even at the cost of their children's lives. She reveals just how Christian Science managed to gain extraordinary legal and Congressional sanction for its dubious practices and tracks its enormous influence on new-age beliefs and other modern healing cults.

A passionate exposé of zealotry, God's Perfect Child tells one of the most dramatic and little-known stories in American religious history.

Review: In God's Perfect Child: Living and Dying in the Christian Science Church, Caroline Fraser delivers the most intelligent, humane, and even-handed history yet published of this important American religion. God's Perfect Child begins by telling the life story of Mary Baker Eddy, who founded Christian Science in 1879. Eddy built the church from a fringe sect into a mainstream religion whose wealth and power exceeded that of many Protestant denominations in the mid-20th century--and were considerably augmented by the church's once-popular newspaper, the Christian Science Monitor.

Fraser, a literary critic and poet who was raised a Christian Scientist, has a relentless analytic bent and an acute eye for physical detail, both of which are in evidence on every page of this book. Her stories of parents whose attempts at faith-healing resulted in their children's deaths are especially poignant. These stories also illuminate and analyze the fears and pains that have plagued many Christian Scientists who subscribe to Eddy's belief that individuals can control their physical destiny by force of faith. Ultimately, Fraser has little sympathy for the obdurate self-reliance advocated by Christian Scientist doctrine, which she sees as a forerunner to the extremist paranoia of contemporary cults. "The suggestibility, infatuation, and enthusiasm that sparked Christian Science ... lies behind our current anxious fixations on imaginary perils and medical conspiracies," Fraser writes. "Florid though they may seem, such fears can have far from imaginary consequences."

The goal of Fraser's book is to track down and annihilate irrational fears in the religion of her childhood; her reason for doing so, however, exudes an undeniably spiritual grace: "Should we continue to pursue [these fears], our providences will surely grow ever more remarkable." --Michael Joseph Gross

Book Description Holt & Company, Henry. Hardcover. Condition: Good. A copy that has been read, but remains in clean condition. All pages are intact, and the cover is intact. The spine may show signs of wear. Pages can include limited notes and highlighting, and the copy can include previous owner inscriptions. The dust jacket is missing. At ThriftBooks, our motto is: Read More, Spend Less. Seller Inventory # G0805044302I3N01

Book Description Holt & Company, Henry. Hardcover. Condition: Very Good. A copy that has been read, but remains in excellent condition. Pages are intact and are not marred by notes or highlighting, but may contain a neat previous owner name. The spine remains undamaged. An ex-library book and may have standard library stamps and/or stickers. At ThriftBooks, our motto is: Read More, Spend Less. Seller Inventory # G0805044302I4N10

Book Description Metropolitan Books. Condition: Good. All orders guaranteed and ship within 24 hours. Before placing your order for please contact us for confirmation on the book's binding. Check out our other listings to add to your order for discounted shipping. Seller Inventory # WAL-C-2a-000946

Book Description Holt & Company, Henry. Hardcover. Condition: Good. A copy that has been read, but remains in clean condition. All pages are intact, and the cover is intact. The spine may show signs of wear. Pages can include limited notes and highlighting, and the copy can include previous owner inscriptions. At ThriftBooks, our motto is: Read More, Spend Less. Seller Inventory # G0805044302I3N00

Book Description Condition: Good. Cover has some rubbing and edge wear. Access codes, CDs, and other accessories may not be included. All items ship Mon-Fri. Seller Inventory # 2Y6JCA001GBJ

Book Description Metropolitan Books, 1999. Condition: Good. A+ Customer service! Satisfaction Guaranteed! Book is in Used-Good condition. Pages and cover are clean and intact. Used items may not include supplementary materials such as CDs or access codes. May show signs of minor shelf wear and contain limited notes and highlighting. Seller Inventory # 0805044302-2-4

Book Description Condition: Good. Most of our items we sell are used and are in good condition. Since our items are mostly used, digital codes are not always valid. We cannot and do not guarantee codes will be unused, redeemable, or included. Our books may contain highlighting or writing. We ship Monday - Friday. Thank you for supporting Goodwill Industries of South Florida. Seller Inventory # 3NCG97003LIR

There are 12 more copies of this book