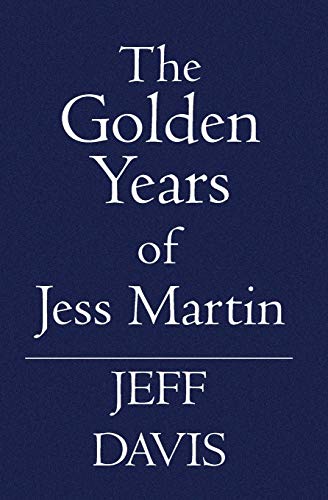 The Golden Years of Jess Martin

Synopsis: Jess Martin retires after teaching mathematics for 30 years at The University of New Mexico. He is offered the job of meeting airplanes bringing marijuana into the U.S.and this leads to Jess ending up with of lot of cocaine and money. The original owners chase Jess to get it back and there is an eventual showdown.

About the Author: Jeff Davis was born on the 22nd of June, 1935, at the age of 40. Being an Army brat he attended numerous primary and secondary schools before graduating from Washington and Lee High School in Arlington, VA. His next stop in the educational process was Rensselaer Polytechnic Institute where he picked up a wife, his first son, a Bachelor's Degree in Electrical Engineering and a Master's Degree in Mathematics. From RPI he went to Washington University in St. Louis. He left St. Louis with a daughter, another son and a Ph.D. in Mathematics. He then went to The University of California at Berkeley as an Instructor for two exciting years, 1963 and 1964. The next thirty years were spent at The University of New Mexico in Albuquerque as a member of The Department of Mathematics and Statistics. This thirty years started with sex, drugs and rock and roll and ended with another daughter who is now in High School. The middle of this thirty years he occupied himself building flattrack racing motorcycles, vain attempts at mastering the guitar and banjo, writing, producing and directing video plays for the local Community Cable Channel and writing books on calculus, crime, Jesus and children's adventures that no publisher saw fit to accept. The calculus book was far enough out of the mainstream that he understood why the publishing community passed it by. On the other hand, he thinks it is a great calculus book. The seemingly pointless activity was all used in the pursuit of his first love...teaching. His goal was to find a way to put the mathematics that was in his head into the heads of his students. I questioned how, say,writing plays was pertinent to the teaching mathematics but I will not recite his hours of response here. He has had four marriages and as many divorces. The three children of his first marriage all have jobs and the daughter of his forth marriage is a sweetheart and has a lead in a school play. He now lives alone in a one room cabin in the Datil Mountains of New Mexico. When told that he lives in the 'middle of nowhere' he replies, "No. I live in heaven on earth."

1. The Golden Years of Jess Martin

Book Description BookSurge Publishing, 2005. Condition: Good. Ships from Reno, NV. Shows some signs of wear, and may have some markings on the inside. Seller Inventory # GRP90353610

2. The Golden Years of Jess Martin

3. The Golden Years of Jess Martin

Book Description BookSurge Publishing, 2005. Paperback. Condition: Good. Connecting readers with great books since 1972. Used books may not include companion materials, some shelf wear, may contain highlighting/notes, may not include cdrom or access codes. Customer service is our top priority!. Seller Inventory # S_269393443

4. The Golden Years of Jess Martin

5. The Golden Years of Jess Martin

6. The Golden Years of Jess Martin