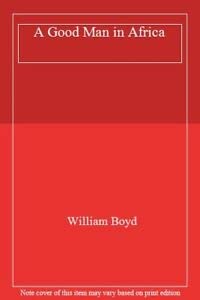 A Good Man in Africa

Synopsis: The Avon bestseller becomes a major motion picture. Gramercy Pictures has set September 9, 1994, as the release date for its film adaptation of Boyd's acclaimed novel A Good Man in Africa. Certain to be one of the fall's most talked-about films, the movie stars Sean Connery, John Lithgow and Louis Gossett, Jr.

Review: Morgan Leafy had high hopes when he first headed out to the small African nation of Kinjanja to serve as Her British Majesty's representative. But once there, Leafy's dreams of professional advancement and personal happiness soon fade: this son of an airport catering manager finds himself overtaken on the career ladder by other, newer recruits to the diplomatic corps who come from the right family and attended the right schools. What's worse, the girl of his dreams has just become engaged to someone younger, thinner, and better connected. And if all this weren't enough to make a career civil servant miserable, Leafy is also being blackmailed by a representative of one of Kinjanja's many political parties who has presented him with a puzzling task: get to know the Scottish medical doctor at a local university.

Author William Boyd has written about Africa before, most notably in his bestselling novel Brazzaville Beach. In A Good Man in Africa, Boyd spins a darkly comic tale of political corruption, revolution, sexual misadventure, blackmail, and death. By novel's end, Leafy may not have become a better man--or even a much wiser one--but he has acquired a kind of dignity and gritty courage for which he is well suited.

Book Description Penguin Books Ltd, 1998. Paperback. Condition: Used; Good. **SHIPPED FROM UK** We believe you will be completely satisfied with our quick and reliable service. All orders are dispatched as swiftly as possible! Buy with confidence!. Seller Inventory # 1734558