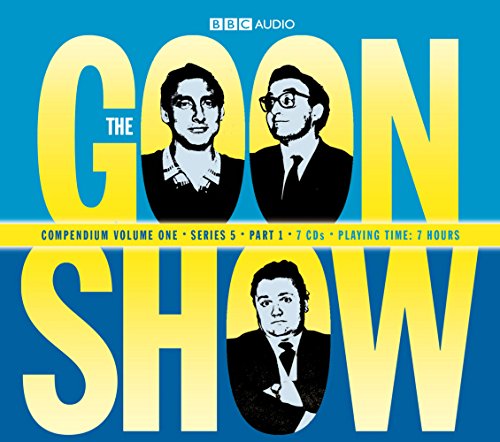 Immensely popular and hugely influential, legendary series The Goon Show changed the face of British comedy. Now, for the first time, this box set collection presents the episodes in chronological order of original broadcast date. This volume includes: The Whistling Spy Enigma, The Lost Gold Mine (of Charlotte), The Dreaded Batter Pudding Hurler (of Bexhill-on-Sea), The Phantom Head Shaver (of Brighton), The Affair of the Lone Banana, The Canal, Lurgi Strikes Britain! (aka Lurgi Strikes Again), The Mystery of the Marie Celeste (solved), The Last Tram (from Clapham), The Booted Gorilla (found?), The Spanish Suitcase, Dishonoured or The Fall of Neddie Seagoon, and Forog. Also featured are some rare archive bonus items, including out-takes and the program Me and My Shadows: Peter Sellers. Two illustrated booklets tell the story of the show’s development with reference to original archive paperwork, plus the history of the recordings themselves. Remastered using new material and the latest technology to give the best possible sound quality, these recordings are sure to appeal to all collectors of The Goon Show. The majority of the episodes on this first volume have been previously released on cassette and CD, but their sound has here been remastered using new source material and technology.

Spike Milligan was perhaps best known as one of the Goons. He went on to become one of Britain's foremost comic writers and performers. His bestselling titles include Adolf Hitler: My Part in His Downfall, Puckoon, and Where have all the Bullets Gone? He died in 2002. Eric Sykes was first introduced to show business whilst in the RAF and went on to write for hit BBC radio shows and appear in TV variety shows whilst writing for comedy greats such as Peter Sellers and Frankie Howerd. Although he is over 80, Sykes continues to work, having starred in Harry Potter and the Goblet of Fire.

Book Description Paperback. Condition: Very Good. The book has been read, but is in excellent condition. Pages are intact and not marred by notes or highlighting. The spine remains undamaged. Seller Inventory # GOR005594724

Book Description BBC Audiobooks Ltd 2007-11-05, 2007. Audio CD. Condition: Very Good. Item is in very good condition. If supplemental codes/CDs for textbooks are required please contact us prior to purchasing as they may be missing. Seller Inventory # DS-1405678003-2