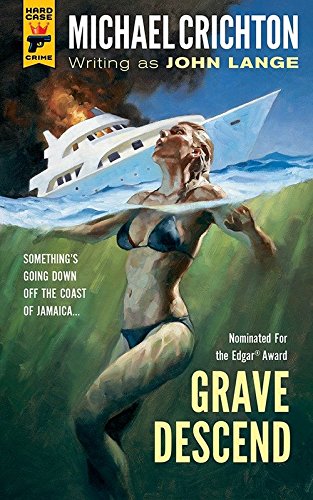 Synopsis: Diver James McGregor is used to exploring sunken ships. But there's something strange about the wreck of the Grave Descend. No one aboard tells quite the same story about what happened. Then there's the mysterious cargo they were carrying...

In one of the most beautiful places on Earth, a sinister plot is about to unfold.  And if McGregor's not careful, he may find himself in over his head.

About the Author: Long before he wrote Jurassic Park, before he scripted blockbuster movies like Twister, before he created the groundbreaking TV series ER, Michael Crichton was an honors student at Harvard Medical School - and writing paperback suspense novels on the side, under the top-secret pen name "John Lange." Lange wrote eight books between 1966 and 1972...and then vanished.

Until, 40 years after John Lange was born, Michael Crichton chose Hard Case Crime to bring him back, personally re-editing two Lange books, even writing new chapters for one of them. Now Hard Case Crime is proud to bring all of John Lange's work back into print for the first time in decades - and the first time ever under Michael Crichton's real name.

Book Description Hard Case Crime. Condition: Acceptable. Paperback The item is fairly worn but still readable. Signs of wear include aesthetic issues such as scratches, worn covers, damaged binding. The item may have identifying markings on it or show other signs of previous use. May have page creases, creased spine, bent cover or markings inside. Packed with care, shipped promptly. Seller Inventory # S-05-2209

Book Description Titan Books Limited. Paperback. Condition: Good. A copy that has been read, but remains in clean condition. All pages are intact, and the cover is intact. The spine may show signs of wear. Pages can include limited notes and highlighting, and the copy can include previous owner inscriptions. At ThriftBooks, our motto is: Read More, Spend Less. Seller Inventory # G1783291249I3N00

Book Description Hard Case Crime, 2013. Condition: Good. A+ Customer service! Satisfaction Guaranteed! Book is in Used-Good condition. Pages and cover are clean and intact. Used items may not include supplementary materials such as CDs or access codes. May show signs of minor shelf wear and contain limited notes and highlighting. Seller Inventory # 1783291249-2-4