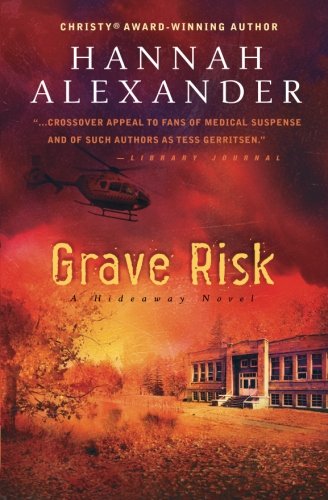 Synopsis: It was a tragedy for the entire town: beloved high school principal Edith Potts collapsed and quickly died.

For nurse Jill Cooper, it was a crushing loss--and the first of many shocks. Two former sweethearts have suddenly returned to town, reawakening all her youthful traumas, secrets and dreams. Then another death occurs. It appears accidental, but is it? Is everything a coincidence? Or could it all possibly be connected to another murder, three decades ago?

Before it's over, Jill will have to look hard at her troubled history, question her sanity, her faith...and face the deepest secrets in her heart.

Excerpt. © Reprinted by permission. All rights reserved.: Fingers marched across Jill Cooper's cheekbones like the legs of a stalking tarantula. She stiffened, eyes shut tight.

She wanted to retreat from the intrusion or jump up from this table and escape. What horrors lay behind the other doors? What had she allowed herself to be talked into? Moral support was one thing, but this--

Jill opened her eyes and looked into the upside-down face of twenty-two-year-old Sheena Marshall. "No."

Sheena had an uncommonly bright, perky grin that matched her bright, perky voice. All the employees of this spa seemed to be infected with terminal optimism, except for Sheena's mother, Mary Marshall, who had always been on the opposite end of that spectrum, even when Jill had graduated from high school with her twenty-seven years ago.

Today, Mary's daughter was actually perkier than usual. "It's fine." Jill wanted to ask when the sheets had last been washed on this massage table, but the question could eventually reach the ears of the owner of this establishment.

Jill was here to provide the owner--her baby sister--moral support for this venture, not to irritate her. Noelle Trask ran a tight ship, and these sheets would be pristine. She would not take kindly to having her employees verbally abused, or even questioned by a client with a few...inter-esting...hang-ups. Especially if that client just happened to be her bossy older sister.

Who would have thought Noelle, the wild child of Hide-away High, would have matured so well?

In fact, Noelle would be a mother before long.

That meant Jill would be an aunt. She felt her tension ease as she smiled at the thought. Aunt Jill. What a wonderful--

A sharp jab on her chin startled her. "Ouch!"

"It's okay. Just relax," Sheena said. "You have a few blemishes here. We can take care of that right--"

"I didn't come here to have my pimples treated." Noelle had warned Jill that the young masseuse tended to try to fix anything that wasn't just right. The young woman obviously had delusions of grandeur and saw herself becoming the makeover queen. Jill refused to be her first experiment.

"I just want a nice, painless massage," Jill said. Actually, she hadn't even wanted that. "Jill Cooper," came a firm, commanding voice from another cubicle in the large, cedar-lined spa, "you agreed to do this. So do it."

"I agreed to a massage, not to have my face poked and prodded like a--"

"Settle down and let the girl do her job."

"Yes, ma'am," Jill replied, then muttered under her breath, "Noelle needs to get these walls soundproofed."

"Nothing. Sorry. I'll be good. I'm having a simply magnificent time." Could Edith hear the sarcasm?

Nope. Edith had never understood the subtleties of irony. The lady simply said what she thought.

Sheena returned to her massaging, distracted from her makeover project. "Will wonders never cease. Edith Potts must be the only person in town you can't boss around."

Jill scowled up at her, and Sheena smiled back, wagging her blond eyebrows, which had been plucked to the point that she looked permanently surprised.

The twit was right, of course. Jill would do anything for Edith. Eighty-three-year-old Edith Potts, retired principal of Hideaway High, could claim friendship with the majority of Hideaway's residents as well as a few of the flocks of tourists who escaped to this tiny lakeside village every year.

To Jill, her elderly friend epitomized courage. Since Jill often felt as if she, herself, epitomized the exact opposite, she had always been drawn to Edith's independent, nurturing spirit. It was Edith who had found a school nurse position for Jill here in Hideaway when tragedy necessitated that Jill would have to return home and stay nearby for the family business.

Once again closing her eyes, Jill tried to give herself over to the relaxation Sheena had promised. "This honey and almond cream smells heavenly."

"It's our most popular. We mix it here ourselves."

"I'd like a jar of that, if it's for sale." Still, if she came away with scars on her face from an over-eager masseuse, Jill would hold Edith and Noelle personally responsible.

In spite of her intentions to remain vigilant, her muscles seemed to liquefy of their own volition. She could feel her body merging with the soft sheets on the massage table until she wasn't sure where the padding ended and her flesh began. Moreover, she didn't care.

Jill seldom relaxed. She had been accused of being one of the most uptight, untouchable single women in Hideaway and the surrounding area. Most of the townsfolk made such comments out of her earshot--or so they thought--but Edith never hesitated to speak her mind, and neither did Noelle.

As Jill thought about it, she had recently found herself blessed--if that could be the term for it--by associates at work who never minced words with her.

They understood the term for her condition. Thanks to recent popular television shows, who didn't know what the letters OCD stood for? Yet they wouldn't let her get away with the typical behavior of someone with obsessive-compulsive disorder.

Blessed...yes. That was it. She was truly blessed by people who loved her in spite--"Your brows could use a good plucking." Sheena's soft voice interrupted Jill's reverie.

"What?" Jill opened her eyes to see the young woman hovering over her, wielding a pair of tweezers far too close. Now what tortures was she expected to endure for the sake of moral support?

"I want to shape your eyebrows. I can take ten years off your face with a few good jerks."

Jill's loose muscles suddenly tightened again. "Look, Sheena Marshall," she said, keeping her voice low in deference to Edith, "I didn't come here to be plucked or jerked or tweezed, I just came for a simple massage with this green stuff you smeared all over my face. Are you finished?"

"Not yet. There are just so many things you need to have done. With your great bone structure--"

"Shouldn't someone be tending to Edith?"

"She knows how to relax, unlike you."

"Where'd your mother go? I'd be perfectly willing to let her finish this massage so you can see to Edith." At least Mary would complete the job without trying to do a total makeover in the process.

"She was only scheduled to work this morning," Sheena said, "and she wasn't too happy about having to do that."

Sheena's mom, Mary Marshall, had reluctantly agreed to come to work at the spa on an as-needed basis until Noelle could determine for sure how many full-time staff members she would require.

Not only was Mary an accomplished massage therapist who had worked for years in surrounding resorts, she was also a cosmetologist, with a good head for business.

Sheena still lived at home, at the age of twenty-two, and seemed content to stay in Hideaway the rest of her life, living with her parents and working here at the spa. Jill felt for the girl, since she, too, had stayed home out of necessity for several years after graduating from high school.

Sheena needed to get out of this place for a while and learn a little more about the world. Mary and Jed were keeping too tight a leash on her.

Jill shifted on the massage table. "I think I heard Noelle come back from her errands a few minutes ago--can't she see to Edith while you're finishing here? I hate to think of Edith waiting over there all by herself."

With a frown, Jill glanced at Sheena. Edith sounded less peaceful and relaxed than she had moments ago.

"We won't be much longer," Sheena assured Jill. "Noelle warned me not to take too long the first time."

First time? Like this was going to happen again? What did Noelle need with moral support, anyway? Though the business was new, it was doing well.

Was that laughter she heard in the next room?

Jill gave a sigh, forcing herself to relax again. Edith had a sense of humor that had brought healing light to some of the darkest moments in Jill's life. Let her laugh.

Yet even as Jill listened to that laughter, it didn't sound quite right....

Sheena's movements slowed, as if she, too, noticed a change.

That wasn't laughter. "Edith, you okay in there?" Jill asked. It sounded as if Edith was coughing.

For several long seconds there was no answer, then came a muffled thump.

Jill lunged up from the massage bed and scrambled out, stumbling against the tray table beside her. Bottles and jars crashed to the wooden floor. She swept past Sheena and raced into the hallway, then into the next cubicle, her loose gown billowing around her.

She thrust the door open to find Edith lying on the floor, gnarled hands grasping her throat, eyes bulging with terror. Her face was still half covered with the mask of herbs, and her white hair tufted over the mask in sticky strands. The half of her face that was bare was nearly purple.

"Call for help!" Jill dropped to her knees beside her friend and wiped the green mask of goo from her face with a towel. "Edith, it's okay. We're going to take care of you."

"Who do I call?" Sheena cried.

"Get Noelle," Jill said, grasping Edith's hand. "I think she came back in. If not, call her on her cell. The clinic's closed today." In a more populated place, they would call 911. Here in Hideaway, that wasn't a good option.

As Sheena rushed from the room, Edith's grasp tightened in Jill's. "S...c-cool," she rasped.

The hand tightened further. "N-no." She closed her eyes, and her grip weakened.

Those eyes opened again. "S...cool..." Her voice barely reached Jill, and her mouth worked as if with great effort. "Re...cords...jet..."