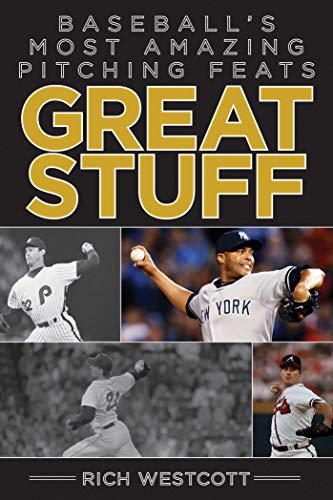 Synopsis: Who never heard of Johnny Vander Meer’s back-to-back no-hitters? Or Christy Mathewson’s three shutouts in one World Series? Or Steve Carlton winning 27 games for a last-place team that won a total of only 59 games? These and a variety of other pitching feats comprise the contents of Rich Westcott’s latest book, Great Stuff: Baseball’s Most Amazing Pitching Feats.

However, this is not a book that focuses on career records. Nor does it concentrate only on the great pitchers of the game. Rather, this is a book that pays tribute to special achievements, some of which were performed in one game, others of which took place during one season, and still others that were an accumulation of related accomplishments performed over an extended period.

In their own way, all were very special. None of these feats was ever duplicated. Each one stands alone as a singular achievement, from Carl Hubbell, who won 24 games in a row; to Bob Feller, who threw 15 strikeouts in his major league debut at the age of 17; to Nolan Ryan, owner of seven no-hitters. A seasoned baseball writer, Westcott explores these feats and many more in Great Stuff .

Skyhorse Publishing, as well as our Sports Publishing imprint, are proud to publish a broad range of books for readers interested in sports books about baseball, pro football, college football, pro and college basketball, hockey, or soccer, we have a book about your sport or your team.

Whether you are a New York Yankees fan or hail from Red Sox nation; whether you are a die-hard Green Bay Packers or Dallas Cowboys fan; whether you root for the Kentucky Wildcats, Louisville Cardinals, UCLA Bruins, or Kansas Jayhawks; whether you route for the Boston Bruins, Toronto Maple Leafs, Montreal Canadiens, or Los Angeles Kings; we have a book for you. While not every title we publish becomes a New York Times bestseller or a national bestseller, we are committed to publishing books on subjects that are sometimes overlooked by other publishers and to authors whose work might not otherwise find a home.

From the Author: Rich Westcott is the author of 23 books, the majority of which are focused on baseball and Philadelphia sports. In 1983 he founded the Phillies Report, which would go on to become the nation’s longest continuously-published baseball team paper. He is one of the official scorers at Phillies games and has covered the Phillies for numerous national publications including Sports Illustrated, The Sporting News, and Baseball America.

Book Description Sports Publishing, 2014. Condition: Good. Shows some signs of wear, and may have some markings on the inside. Seller Inventory # GRP88636664

Book Description Sports Publishing, 2014. Condition: Good. A+ Customer service! Satisfaction Guaranteed! Book is in Used-Good condition. Pages and cover are clean and intact. Used items may not include supplementary materials such as CDs or access codes. May show signs of minor shelf wear and contain limited notes and highlighting. Seller Inventory # 1613216513-2-4