Items related to The Greatest Benefit to Mankind: A Medical History... 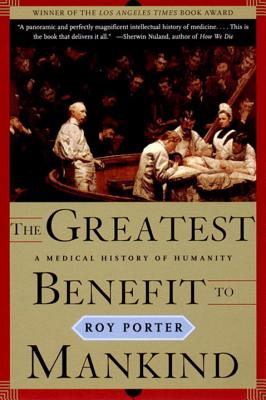 The Greatest Benefit to Mankind: A Medical History of Humanity (Paperback or Softback)

The Greatest Benefit to Mankind: A Medical History of Humanity. Bookseller Inventory # BBS-9780393319804

Title: The Greatest Benefit to Mankind: A Medical ...

"To combine enormous knowledge with a delightful style and a highly idiosyncratic point of view is Roy Porter's special gift, and it makes [this] book . . . alive and fascinating and provocative on every page."―Oliver Sacks, M.D.

Hailed as "a remarkable achievement" (Boston Sunday Globe) and as "a triumph: simultaneously entertaining and instructive, witty and thought-provoking . . . a splendid and thoroughly engrossing book" (Los Angeles Times), Roy Porter's charting of the history of medicine affords us an opportunity as never before to assess its culture and science and its costs and benefits to mankind. Porter explores medicine's evolution against the backdrop of the wider religious, scientific, philosophical, and political beliefs of the culture in which it develops, covering ground from the diseases of the hunter-gatherers to today's threat of AIDS and ebola, from the clearly defined conviction of the Hippocratic oath to the muddy ethical dilemmas of modern-day medicine. Offering up a treasure trove of historical surprises along the way, this book "has instantly become the standard single-volume work in its field" (The Lancet). "The author's perceptiveness is, as usual, scalpel-sharp; his manner genially bedside; his erudition invigorating." - Simon Schama 24 pages of b/w illustrations Review:

Samuel Johnson once called the medical profession "the greatest benefit to mankind." In the 20th century, the quality of that benefit has improved more and more rapidly than at any other comparable time in history. With all the capabilities of modern medicine's practicioners, however, we as a people are as worried about our health as ever.

Roy Porter, a social historian of medicine the London's Wellcome Institute, has written an dauntingly thick history of how medical thinking and practice has risen to the challenges of disease through the centuries. But delve into its pages, and you'll find one marvelous bit of history after another. The obvious highlights are touched upon--Hippocrates introduces his oath, Pasteur homogenizes, Jonas Salk produces the polio vaccine, and so on--but there's also Dr. Francis Willis's curing of The Madness of King George, W. T. G. Morton's hucksterish use of ether in surgery, and research on digestion conducted using a man with a stomach fistula (if you don't know what that means, you may not want to know). Porter is straightforward about his deliberate focus on Western medical traditions, citing their predominant influence on global medicine, and with The Greatest Benefit to Mankind, he has produced a volume worthy of that tradition's legacy.

Save up to 90% on your favorite items at BargainBookStores.com! Our 20,000 square foot warehouse in Grand Rapids, Michigan is filled with hundreds of thousands of books and consumer goods, all at the lowest prices! Weżve been serving internet customers with great deals since 2001. All books ship from Grand Rapids, Michigan. 100% Customer Satisfaction Guaranteed We want to ensure your satisfaction. If you are dissatisfied with your purchase or shopping experience, we would like to hear from you. Please contact us by email: cs@bargainbookstores.com. Please be sure to include your contact information and order number. We do not charge a restocking fee for returns. Your Privacy BargainBookStores.com does not provide, sell or market customer information to other businesses or organizations.