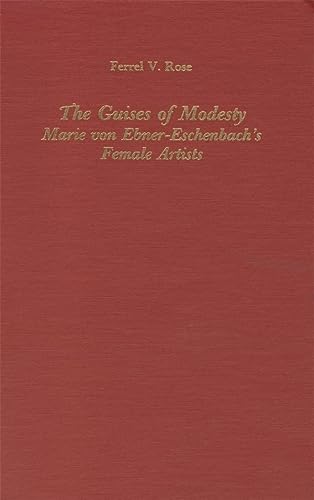 Synopsis: One hundred years ago Marie von Ebner-Eschenbach (1830-1916) enjoyed within German-speaking countries the stature of a George Eliot, and her style and thematic interests resembled those of her English contemporary. Today, however, her fame has faded, and she is mainly known only to specialists, partly because her 'canon' has shrunk to a few prose works which are more reconciliatory than critical, falsely suggesting her to be a passive, conventional writer: her 'happy endings' have diverted her readers from the critical messages beneath the surface. By close analysis of a variety of works spanning the whole of her career, The Guises of Modesty calls attention to the author's beginnings in the genres of drama and satire and shows her to be considerably more complex and abrasive than most literary scholars have assumed; Professor Rose argues that only by censoring or disguising the female artist, a prominent figure in her satirical writings, was Ebner able to conceal her 'unwomanly' aspirations to become a recognized author. She explores Ebner's frequently ambivalent attitudes towards other writers whose work influenced her own, including Schiller, her preoccupation with cultural harbingers of modernity, such as Nietzsche and Ibsen, and parallels with other prominent literary women, such as George Eliot and Louise von François. The Guises of Modesty is the first feminist study of Ebner's artist novellas; it will be invaluable to students and scholars working in the areas of Women's Studies, European Realism, and fin-de-siècle Vienna. PROFESSOR ROSE teaches at Grinnell College.

About the Author: PROFESSOR ROSE teaches at Grinnell College.

Book Description Camden House, 1994. Condition: Good. This is an ex-library book and may have the usual library/used-book markings inside.This book has hardback covers. In good all round condition. No dust jacket. Please note the Image in this listing is a stock photo and may not match the covers of the actual item,600grams, ISBN:9781879751699. Seller Inventory # 4744032

10. The Guises of Modesty Format: Hardcover