Items related to HALF IN LOVE: Stories 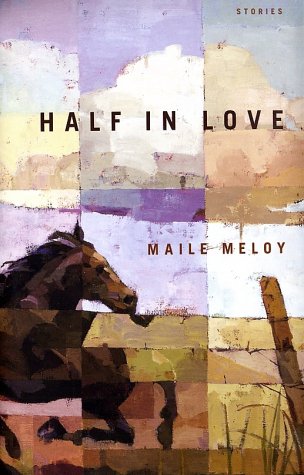 HALF IN LOVE: Stories

Title: HALF IN LOVE: Stories

Maile Meloy's smart, surprising and emotional stories, published in The New Yorker, The Paris Review and Best New American Voices, have already earned her devoted admirers. Lean and controlled in their narration, abundant and moving in their effects, the fourteen stories collected in Half in Love are the debut of a striking new talent. Ten of the stories take place in the modern American West, and in Meloy's unsentimental vision this world becomes vivid and unexpected. In her story "Tome," the disabled client of a Montana lawyer takes a Samoan football player hostage. In "Four Lean Hounds, ca. 1976," two young couples, bound by a complicated friendship, face a complicated grief when one of the four dies. The college-bound daughter of a ranch foreman, in "Ranch Girl," has to choose which adult world she wants to occupy. And in "A Stakes Horse," a young woman deals with risk and loss, both at the racetrack and at home. In small towns and in isolated country, these characters face violence and dread and betrayal, love and loss of love and the ease with which life can be disrupted -- all rendered in Meloy's clear, assured style. Other stories in the collection take us to different times and places with the same remarkable skill and intuition. In "Red," a young American soldier in World War II encounters an English girl exhausted by the Blitz. Guests in a Greek villa, looking for gossip in "Last of the White Slaves," find a more disconcerting story than they wanted. And in "Aqua Boulevard" -- winner of the 2001 Aga Khan Prize for Fiction -- an elderly Parisian confronts his fear of death. Meloy's command of her characters' voices is breathtaking; their fears and desires are deftly illuminated. Meloy's characters inevitably stand on the edge of something -- of discovery or decision or change -- and Meloy delivers these moments with a stirring combination of authority and sympathy. This is a voice of astonishing clarity and unforgettable emotional power.

Maile Meloy was born in Helena, Montana. She received the 2001 Aga Khan Prize for Fiction for the best story published in The Paris Review. Her stories have also appeared in The New Yorker, Ploughshares, The Ontario Review and Best New American Voices. She lives in California.