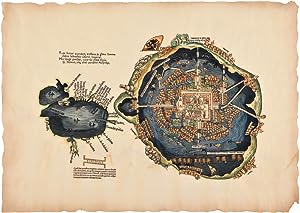 Handcolored engraving, 16 1/2 x 23 1/2 inches. A bit toned at edges, dampstain to lower third. Very good. Framed. An expert facsimile of Hernando Cortés's extremely-rare map of Tenochtitlan and the Gulf of Mexico, commonly referred to as "Mexico City and the Gulf of Mexico." The map was originally engraved in Nuremberg and published with the 1524 first Latin edition of Cortés' second letter describing his adventures in the New World, titled PRAECLARA FERDINADI CORTESII DE NOVA MARIS OCEANI HYSPANIA NARRATIO. This map is generally considered the earliest plan of any city in America, and was reportedly drawn from memory by Cortés in 1521. Owing to its importance, it has been reproduced many times over the centuries. This map was the first view Europeans had of a city that had, by that time, been leveled by Cortés. Scholars believe the map was based on an unknown map made by indigenous people in Tenochtitlan, since many of the elements of the map are a native construct. For example, the central plaza is large relative to the city, emphasizing its importance, but there are only the twin temples (Templo Mayor with temples dedicated to Huitzilopochtli and Tlaloc, the gods of war and rain, respectively), two skull racks (tzompantli) and a couple other structures. Yet, the Spaniards mention in their letters and other writings that the city center was bustling with activity. Later archaeological work has indicated that there were over seventy buildings in the plaza. This map reflects the importance of Templo Mayor in the mind of a native person rather than a European explorer. The shape of the city and lake in which it resides are also thought to be native constructs. The map is oriented with West at the top. It shows many details, although rendered in a European style (the houses are medieval, for example). There are canals in the city, and bridges across the lake, so a person could go anywhere on foot or by canoe. There is a dike that was built at the eastern edge to control flooding after a disastrous flood in 1452. However, the dike is depicted as a wattle and daub wall, but reports indicate it was primarily rock and mud. Cortés has noted Moctezuma's houses, a zoo, and "pleasure houses" for his women. The smaller map to the left is the outline of the Gulf of Mexico, oriented with South at the top. It is the first map to name Florida ("la florida"), and shows a large river to the west, noted as the Rio del spiritu sancto (sacred spirit river) (identity unclear, but many see it as the Mississippi because of its size), the Yucatan is nearly an island (on this map with a very narrow isthmus), and just east of Florida is the tip of Cuba, here connected to North America. In 1521-22, Cortés laid siege to the city, ultimately leveling it stone by stone. The Spanish then rebuilt the city, leaving many features in place (such as four divisions), but replacing the temples with churches and other civic buildings in the center of town. Much of the city depicted on this map now lies under present-day Mexico City. A well-executed facsimile of one of the most important maps in the history of America. Seller Inventory # WRCAM54039