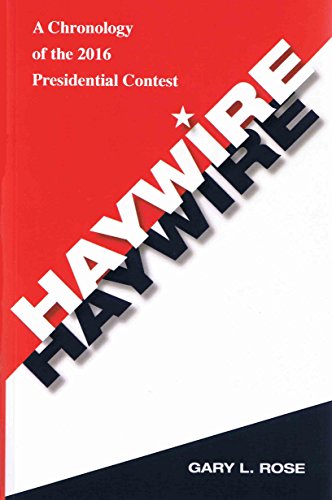 HAYWIRE: A Chronology of the 2016 Presidential Contest

Synopsis: To date there has been no book, popular or academic, that so meticulously tracks one presidential election contest from the starting gate to the finish line as HAYWIRE: A Chronology of the 2016 Presidential Contest.

Examining the relevant events from early 2013 when signs of the 2016 contest first began to emerge, to election day on November 8, 2016, Gary Rose describes and analyzes what will undoubtedly be remembered as the most unconventional and outlandish presidential contest in the history of American politics. Rather than covering political developments related to the 2016 contest on a year-by-year basis, Rose explores political turning points, large and small, that occurred during the individual seasons within each year.

No stone is left unturned in this gripping exploration of the stunning 2016 race for the White House. Organized into eleven chapters and five distinct parts, Haywire offers readers an opportunity to learn about the many visible and backstage dimensions of modern presidential politics. Readers will inevitably conclude that presidential contests, despite the forecasts of pollsters and pundits, can still yield unpredictable and stunning results.

About the Author: GARY L. ROSE, Ph.D. is Professor and Chair
of the Department of Government, Politics, Global Studies at Sacred Heart University in Fairfield, Connecticut.

A widely quoted political commentator for national, state, and local media, Professor Rose was named Connecticut Professor of the Year in 2011 by the Carnegie Foundation and the Council for Advancement and Support of Education (CASE). He is also the recipient of several teaching and scholarship awards.

1. HAYWIRE: A Chronology of the 2016 Presidential Contest

Book Description Ox Bow Press. Paperback. Condition: Fair. A readable copy. All pages are intact, and the cover is intact. Pages can include considerable notes-in pen or highlighter-but the notes cannot obscure the text. At ThriftBooks, our motto is: Read More, Spend Less. Seller Inventory # G1881987000I5N00

2. HAYWIRE: A Chronology of the 2016 Presidential Contest