Items related to THE HEALTH OF THE COUNTRY 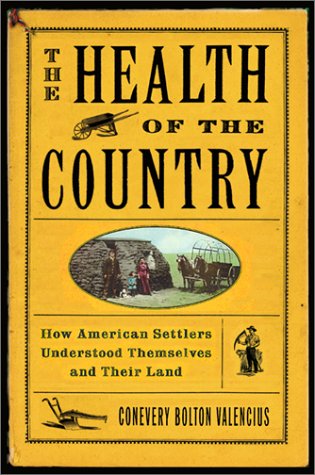 THE HEALTH OF THE COUNTRY

Title: THE HEALTH OF THE COUNTRY

Many have written about the settling of early 19th century America, but until now no one has explored these settlers' self-consciousness about what they were doing, what "settling" and cultivating the land itself meant. In The Health of the Country, Conevery Valencius shows that assessments of the "sickliness" or "health" of land pervade settlers' letters, journals, newspapers, and literature--evidence of the common sense of another time, when land was believed to have intrinsic health characteristics and the human body was understood to be linked in intimate and intricate ways with similar balances in the surrounding world. Valencius focuses her research on the Arkansas and Missouri territories from the time of the Louisiana Purchase to the Civil War, capturing the excitement, romanticism, confusion, and anxiety of the frontier experience and revealing how these emotions were bound up with settlers' unique relationships with their land. This is a complex and rewarding book, a beautifully written, fresh account of the gritty details of American expansion, animated by the voices of the settlers themselves.

Conevery Bolton Valencius received her Ph.D. from Harvard. In 2000 she won the prestigious Allan Nevins Prize, awarded by the Society of American Historians for best-written dissertation in American history. She lives in St. Louis, Missouri, where she is an assistant professor at Washington University.

Columbia Books opened in 1977 and began selling online in 1991 with the advent of Interloc; we've been selling on abebooks since they first began. We have an eclectic mix of 30,000 books, ephemera and artwork; something for collectors and readers alike.


We accept credit cards, checks, money orders; you may also order directly from us if you like. We are very careful with our descriptions; however books are always returnable if not as described.
Contact details:
Annette Kolling-Buckley
Columbia Books, Inc. ABAA/ILAB
1907 Gordon Street
Columbia, MO 65201
573-449-7417
colbooks@tranquility.net
www.columbiabooksonline.com