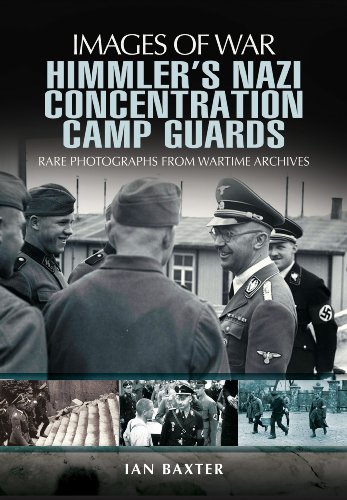 Synopsis: This book is the most thorough study yet of the whole process of recruitment, indoctrination and performance of those responsible for the guarding of concentration camp inmates. It is not an attractive subject – the conversion of human beings into murderers and individuals routinely carrying out appalling acts of cruelty are bound to be shocking. But it happened under the Third Reich on a massive scale.

Of the 55,000 Nazi concentration camp guards, some 3,700 were women. The book studies their behavior with examples along with that of their male counter-parts.

The book follows the development of concentration camps from the early beginnings in the 1930s (Buchenwald, Sachsenhausen etc.), through their establishment in the conquered territories of Poland and Czechoslovakia to the extermination camps (Dachau, Auschwitz). In parallel, it describes, using original source material, the behavior of the guards who became in numerous cases immune to the horrors around them.

This is well borne out by the conduct of the guards during the Liberation process, which is also movingly described using numerous personal accounts of shocked Allied personnel.

About the Author: Ian Baxter is an avid collector of WW2 photographs. His previous books in this Series include Hitler’s Boy Soldiers, Nazi Concentration Camp Commandants and German Army on the Eastern Front – The Advance, German Army on the Eastern Front – The Retreat and Nazi Concentration Camp Commandants, The Crushing of Army Group (North) and the SS Waffen Division series including SS Leibstandarte Division and SS Totenkopf Division At War. He lives near Chelmsford, Essex.

Book Description Paperback. Condition: Very Good. The book has been read, but is in excellent condition. Pages are intact and not marred by notes or highlighting. The spine remains undamaged. Seller Inventory # GOR007176310

Book Description Condition: Acceptable. The book is 100% readable but visibly worn, and damaged. This may include stains. tears, rips, folded pages, binding damage, dents, scuffs, scratches and sticker residue. The book also may contain heavy highlighting and notes. Thank you for supporting Goodwill Industries of Ventura and Santa Barbara County in our mission to enhance the dignity and quality of life of individuals and families through education, skills training, and the power of employment. Seller Inventory # 4JQKXZ0007L9

Book Description Pen & Sword Military 2012-11-15, 2012. Paperback. Condition: Very Good. Some light wear to the cover edges. Some scratches to both sides. The content is fine to read and use throughout, a decent copy. Book. Seller Inventory # 133546-4

Book Description Pen & Sword Books 2013-01-19, 2013. Paperback. Condition: Good. Item is in good condition. Some moderate creases and wear. This item may not come with CDs or additional parts including access codes for textbooks. Might be an ex-library copy and contain writing/highlighting. Seller Inventory # DS-1848847998-3