Items related to HISTORY OF MASSACHUSETTS 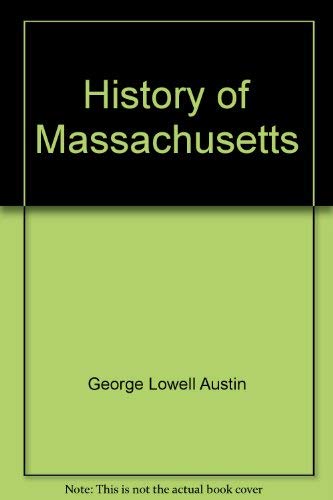 A history of the state of Massachusetts from the 1600s to 1883, the chapters in this work cover: the Plymouth Colony, the Massachusetts Colony, the Confederacy of the Colonies, Massachusetts and Charles II, King Philip's War, the Downfall of the Charter, the Province of Massachusetts Bay, the Witchcraft Delusion, the Spirit of the People, the French and Indian War, the Stamp Act, Military Despotism in the Province, the Progress of the Struggle, Lexington and Concord, Bunker Hill and the Siege of Boston, the War for Independence, Adoption of the State Constitution, Shay's Rebellion, Adoption of the Federal Constitution, the War of 1812, the Era of Politics, the Growth of Public Opinion, the Slavery Agitation, Massachusetts in the Civil War, Since the War, and the Era of Reform. A list of the succession of the governors of MA can be found just prior to the original index, and over 20 illustrations, depicting historical scenes, landmark buildings and prominent people, help the reader relate to the history this text so aptly describes. (1884), 2002, paper, index, 598 pp.

We are a Full-Time Book Shop in business over 16 years - We accept calls at 828-265-4970 and welcome visitors to browse our shop! We can special order books and ship gift books almost anywhnere in the world. We wrap most books with jackets in Brodart Dust Jacket Protectors at no extra charge - books sent from publishers will not be in Brodart Covers. We Specialize in Civil War, Military, and Genealogy Books and have the largest selection of Civil War and Military Books on the Internet. We offer discounts on new and reprint titles. Our Home Page shown with our Abe listings offers access to videos, maps, swords, autographs, music and other Military Items. Our shop and mailing address is: C. Clayton Thompson-Bookseller, 584 Briarwood, Boone, NC 28607. We do not offer any dealer discounts on ABE orders.


PAYMENT VIA PAYPAL, DISCOVER CARD, AMERICAN EXPRESS, VISA, OR MASTERCARD. We accept Checks and Money Orders drawn on U.S. Banks and Canadian Postal Money Orders - - if you are not sure how to arrange payment, please call us at 828-265-4970 or email us at Greatbooks@aol.com


NOTE: FEEL FREE TO INQUIRE ABOUT SHIPPING COST ON OVERSEAS ORDERS - WE CAN NO LONGER SHIP VIA SURFACE POST - WE ARE HAPPY TO QUOTE SHIPPING ON LARGE OR HEAVY BOOKS - SIMPLY CALL US AT 828-265-4970 OR EMAIL US AT "Greatbooks@aol.com"

Shipping costs are based on standard size books sent without insurance. Some books are shipped direct from publishers and added costs may apply as stated in book description - including shipments to Hawaii, Alaska and Overseas. Feel free to contact us to inquire on shipping cost. If your book order is heavy or oversized, we will contact you to let you know extra shipping is required.