Items related to A HISTORY OF WRITING IN JAPAN 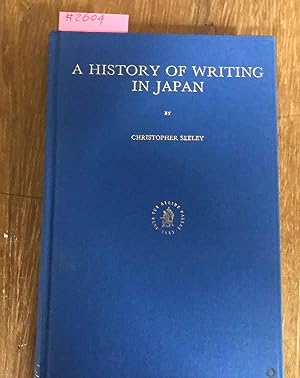 A HISTORY OF WRITING IN JAPAN

Quantity Available: 1
View all  copies of this book
Buy Used
Price: US$ 104.15 Convert Currency
Shipping: US$ 28.09 From Netherlands to U.S.A. Destination, rates & speeds
Add to basket

Title: A HISTORY OF WRITING IN JAPAN

This book deals chronologically with the history of writing in Japan, a subject which spans a period of 2,000 years, beginning with the transmission of writing from China in about the first or second century AD, and concluding with the use of written Japanese with computers.
Topics dealt with include the adoption of Chinese writing and its subsequent adaptation in Japan, forms of writing employed in works such as the Kojiki and Man'yoshu, development of the kana syllabaries, evolution of mixed character-kana orthography, historical kana usage, the rise of literacy during the Edo period, and the main changes that have taken place in written Japanese in the modern period (ca. 1868 onwards).
This is the first full-length work in a European language to provide the Western reader with an overall account of the subject concerned, based on extensive examination of both primary and secondary materials.

C. Seeley is Head of the Department of Asian Languages at the University of Canterbury, New Zealand. Publications: many articles in such publications as Gobun, Nihongo Kyoiku, Encyclopedia of Japan, and Visible Language.


VISA, Mastercard, American Express, Invoice and PayPal.
All books are in good / very good/ mint condition unless otherwise stated.
If the books are very heavy we will let you know in advance if extra shipping
charges are in order.