Items related to THE HOLE IN THE FLAG: A Romanian Exile's Story...

Home Codrescu, Andrei, with photographs by David Graham THE HOLE IN THE FLAG: A Romanian Exile's Story of Return and ...
Stock Image 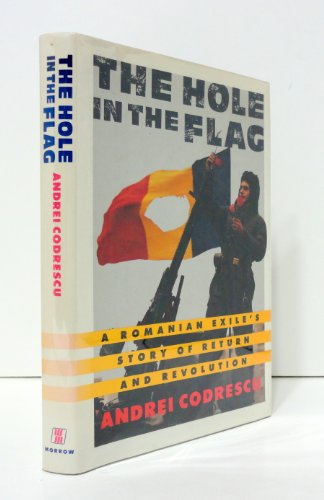 THE HOLE IN THE FLAG: A Romanian Exile's Story of Return and Revolution

Title: THE HOLE IN THE FLAG: A Romanian Exile's ...

A Romanian poet-in-exile returns to his native country in the wake of the 1987 revolution that overthrew communist dictator Nicholai Ceausescu, and examines the changes in the country and their effect on him

A passionate, poetic view of Romania in the days immediately after the fall of the Ceausescus by poet, essayist, and NPR commentator Codrescu (The Disappearance of the Outside, 1990, etc.), who returned to his homeland after living in exile for 25 years. Brought to Bucharest on assignment for NPR and ABC, Codrescu chronicles his journey and the events precipitating it, as well as his first jubilant reactions while standing in bloodstained, ice- covered University Square on New Year's Day 1990. Sobered by subsequent experiences on the streets and in the corridors of power, he records encounters with people from all walks of life living their first winter of freedom in 45 years in a city ravaged by recent fighting and decades of inadequate food and supplies. A journey to his birthplace in Transylvania summons a surge of memories, enhanced when he renews contact with high-school friends, and he vows to return for their reunion in the summer. When he does, in the wake of a renewed struggle against the National Salvation Front with its Communist leadership, and a dubious national election, he finds that the heady spirit of a few months before has already vanished, replaced by a reactionary mood and assertions that the revolution had been betrayed from the start. A final blow occurs at the reunion, as he sees that his school buddies profited immensely under tyranny, and the aftermath has fostered in them a vigorous nationalism and racism not seen publicly since the Nazi days. Intensely personal and keenly perceptive: a poignant study of a troubled homecoming, and a lively resource for anyone who would understand Romania today. -- Copyright ©1991, Kirkus Associates, LP. All rights reserved.