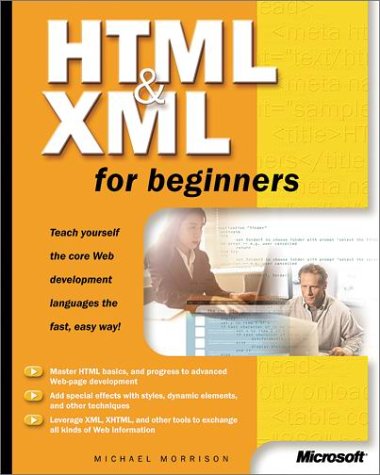 HTML and XML for Beginners provides Web coding beginners with a concise guide to the world of Hypertext Markup Language (HTML), and previews even more powerful alternatives such as Extensible Markup Language (XML). Rich in examples, the book walks the Web beginner through basic HTML techniques such as creating and publishing Web pages, formatting text, adding graphics, and creating hyperlinks. It shows how to use tables to organize content, forms to gather input from site visitors, image maps to support point-and-click navigation, and styles, properties, and multimedia to add visual and sonic interest. It clearly demonstrates how to spice up Web pages with interactive elements by using Dynamic HTML (DHTML). The book ends with an extensive discussion of the most important new language on the Web, XML, and its relevance for data exchange. The book also explores XML variants such as Vector Markup Language (VML), the standard for creating, storing, and exchanging vector drawings on the Internet, and XHTML the merger of XML and HTML. All in all, this title provides the fastest way to get started coding a Web page.

In addition to his primary profession as a writer and technical consultant, Michael is the founder of Stalefish Labs (www.stalefishlabs.com), an entertainment company specializing in games, toys, and interactive media. When not glued to his computer, skateboarding, playing hockey, or watching movies with his wife, Masheed, Michael enjoys hanging out by his koi pond.