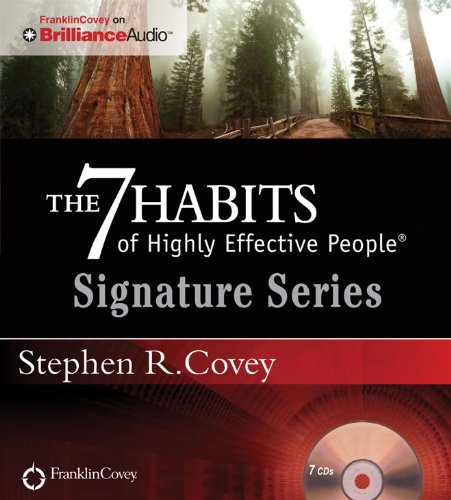 This Signature Series is an unmissable audiobook companion to Stephen R. Covey’s The 7 Habits of Highly Effective People. In this special edition you will have the opportunity to listen to Dr. Covey teach each of the 7 Habits; these are unique live recordings giving you his personal insights and examples regarding the application of the habits—to today's challenges. Each disc is filled with material you will not hear or read elsewhere.

Review: Anyone who thinks the audiocassette adaptation of Stephen Covey's bestseller, The 7 Habits of Highly Effective People, is a shortcut to reading the book has another thing coming. As a preview, the cassette is worth every one of its 90 minutes; as a substitute for the original, it will only leave you wishing for the rest. There's a reason 7 Habits has sold more than 5 million copies and been translated into 32 languages. Serious work has obviously gone into it, and serious change can likely come out of it--but only with constant discipline and steadfast commitment. As the densely packed tape makes immediately clear, this is no quick fix for what's ailing us in our personal and professional lives.

Book Description Franklin Covey on Brilliance Audio 2012-04-01, 2012. Audio CD. Condition: Good. Item is in good condition. Some moderate creases and wear. This item may not come with CDs or additional parts including access codes for textbooks. Might be an ex-library copy and contain writing/highlighting. Seller Inventory # DS-1455893560-3