Items related to Hail to the Chief: The Making and Unmaking of American...

Home Dallek, Robert Hail to the Chief: The Making and Unmaking of American Presidents
Stock Image 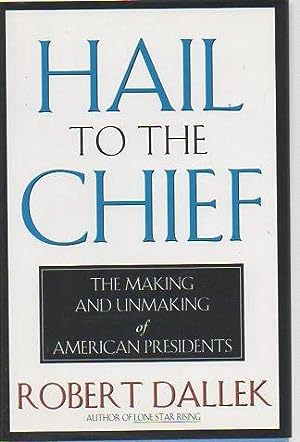 Hail to the Chief: The Making and Unmaking of American Presidents

Title: Hail to the Chief: The Making and Unmaking ...

An analysis of the history of the U.S. presidency details the lives of each president and looks at why some have become national heroes while others have faded into historical obscurity, revealing five qualities that successful presidents have typically brought to the Oval Office. Tour.

Gerald Ford once said, "We have not an imperial Presidency; we have an imperiled Presidency." In recent years, presidents have bemoaned the red tape, complained about the limitations of the position, and even lambasted the press for the ineffectiveness of the office. In Hail to the Chief, Robert Dallek argues that the institution of the Presidency is blamed too often for the shortcomings of its occupants. Character, he says, is what makes Abraham Lincoln stand out from Millard Fillmore, or Franklin Delano Roosevelt overshadow Jimmy Carter. Stellar presidents, he maintains, possess vision, pragmatism, persuasiveness, charisma, and credibility--qualities that a great majority of our nation's leaders have sorely lacked.

Bookfeathers, LLC is an online bookstore located in the Central Susquehanna Valley at Lewisburg, Pennsylvania. We maintain a general stock, with particular interest in the arts, humanities and sciences. We are also interested in works of local interest and history, regardless of location. We describe items to a fault, and classify books using a broad range of keywords. Many of the images we display are scans of the actual items described and scans of any item are available on request. Please e-mail us with any questions about any item.


BookfeathersLLC is organized as a Limited Liability Corporation with Frederick
Reiner as sole partner. Mailing address is P.O.Box 402, Lewisburg, Pa. 17837,
USA.
We guarantee the condition of every book as it's described on the Abebooks web
sites. If you're dissatisfied with your purchase (Incorrect Book/Not as
Described/Damaged) or if the order hasn't arrived, you're eligible for a refund
within 10 days of the estimated delivery date. If you've changed your mind about
a
book that you've ordered...