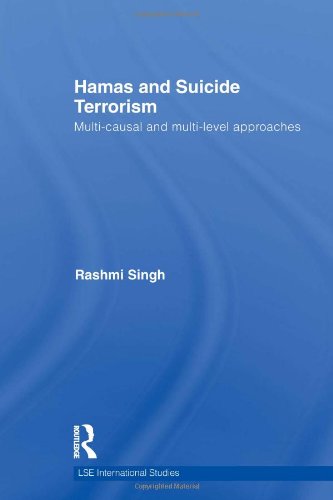 This book analyses the root causes of suicide terrorism at both the elite and rank-and- file levels of the Hamas and also explains why this tactic has disappeared in the post-2006 period.

This volume adopts a multi-causal, multi-level approach to analyse the use of suicide bombings by Hamas and its individual operatives in the Israeli-Palestinian conflict. It uses extensive fieldwork and on-the-ground interviews in order to delve beneath the surface and understand why and how suicide operations were adopted as a sustained mechanism of engagement within the Israeli-Palestinian conflict. Three core factors fuelled Hamas’s suicide bombing campaigns. First, Palestinian suicide operations are a complex combination of instrumental and expressive violence adopted by both organisations and individuals to achieve political and/or societal survival, retaliation and competition. In other words, suicide bombings not only serve distinct political and strategic goals for both Hamas and its operatives but they also serve to convey a symbolic message to various audiences, within Israel, the Palestinian territories and around the world. Second, suicide operations perform a crucial role in the formation and consolidation of Palestinian national identity and are also the latest manifestation of the historically entrenched cultural norm of militant heroic martyrdom. Finally, Hamas’s use of political Islam also facilitates the articulation, justification and legitimisation of suicide operations as a modern-day jihad against Israel through the means of modern interpretations and fatwas.

This approach not only facilitates a much needed, multifaceted, holistic understanding of suicide bombings in this particular region but also yields policy-relevant lessons to address extreme political violence in other parts of the world. This book will be of much interest to students of Hamas, terrorism, Middle East politics and security studies.

Rashmi Singh is a Lecturer at the Centre for the Study of Terrorism and Political Violence and the University of St Andrews.