Home Elliott Taylor Up The Hammers!: The West Ham Battalion in the Great War 1914-... 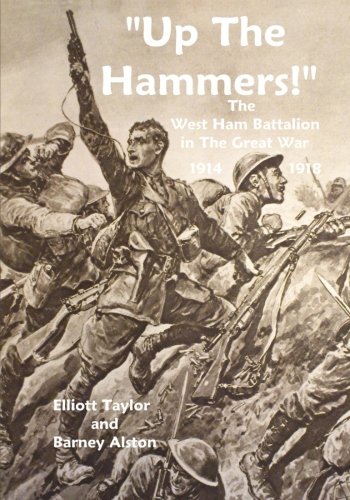 Synopsis: Read the true story of the West Ham Battalion volunteers in the Great War. This is now the Third Edition (Nov 2015), updated to feature even more never-before-published full page photographs as well as newer information and personal anecdotes. A century ago some of them were employed at the Thames Ironworks while many of them supported their local team with a flat cap passion. All the men came from within West Ham Utd’s traditional areas of support, from Stepney to Silvertown, Leyton to Limehouse, Barking to Bow and everywhere in between. A few of them were underage while many were actually overage but they all stood up in January 1915 and volunteered in the Hammers to defend the things they held dear. Not many of them came home. Read this exciting story and share in their pride and sadness, the good times and bad – from basic training on Wanstead Flats and route marching along Green Street in 1915 as riots erupted around them, through to the deadly meat-grinder of the Somme in 1916 and finally their epic last stand at Cambrai in 1917 – the same year West Ham Utd were crowned Champions of the the Southern Combination League, ahead of Chelsea and Millwall. It’s a story every West Ham supporter should know and goes a long way to explain the reasons behind the memorial plaque to the Hammers beside the club shop entrance. Over a decade of research has revealed long forgotten people and memories. It’s a story of local pride, the like of which will never come again. Through official documents, eye-witness accounts, diaries, newspaper reports and more than 60 never before published photographs of the West Ham Battalion you will discover the men, their private and collective battles and their ultimate fate.

Book Description CreateSpace Independent Publishing Platform, 2012. Paperback. Condition: Used; Good. **SHIPPED FROM UK** We believe you will be completely satisfied with our quick and reliable service. All orders are dispatched as swiftly as possible! Buy with confidence!. Seller Inventory # 2406430