Items related to Heroes of the Hardcourt: Ranking Pro Basketball's... 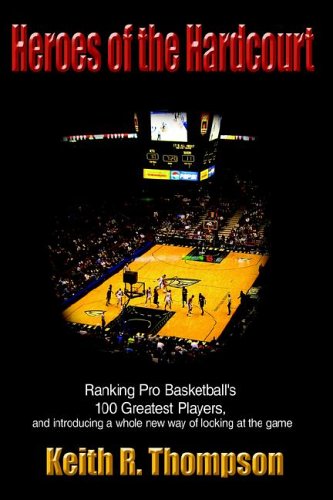 Heroes of the Hardcourt: Ranking Pro Basketball's 100 Greatest Players, and Introducing a Whole New Way of Looking at the Game

Upon its establishment in 1946 the NBA – via its forerunner the Basketball Association of America – became the 21st professional basketball league to be formed in the U.S., and the one that would outlast all the others. In addition, since 1896 when professional basketball began in Trenton, New Jersey thousands of players have competed in a pro game, and generated countless hours of debate as to who the best players are in the history of the sport. In fact, precisely 3572 players and 439 All-stars have graced the courts of the NBA and the American Basketball Association when it was in operation between 1967 and 1976. And until now there has never been a truly scientific method of evaluating their performances on a basketball court, and determining who is the all-time best. Finally, after 109 years, such a measure has been created.

This book, Heroes of the Hardcourt: Ranking Pro Basketball’s 100 Greatest Players identifies and profiles the 100 greatest players to play professional basketball since 1946, and ranks them by utilizing a scientific methodology known as the Performance Efficiency Rating (PER) System developed by the author, a former economics professor. This is the most comprehensive measure ever devised to accurately measure basketball performance and answer the question of who is the greatest basketball player ever. This methodology has accurately forecasted the annual regular season MVP in three of the last four NBA seasons, and predicted which team is most likely to win the NBA championship (forecasted the eventual champion in seven of the last ten years).

This book will cause you to rethink your own top 50 greatest players; and the top 10 players, let’s just say it’s sure to raise a few eyebrows. Without doubt this is the most scientific basketball book ever written and should end all debates as to the game’s all-time greats.

Heroes of the Hardcourt, in addition to profiling the top 100 players also provides an historical summary of the one hundred-plus years of professional basketball in the U.S., and concludes with an explanation of how to better link productivity with pay among professional athletes. It shows that the PER can accurately forecast which rookies drafted in a particular year are indeed the best selections, and follows that up with an analysis of the 1984 NBA draft in which four of the best players to ever compete were drafted. It concludes that not only did the Portland Trailblazers make a poor decision in selecting Sam Bowie over Michael Jordan, but so did the Houston Rockets who also drafted Hakeem Olajuwon over MJ. A knowledge of the PER methodology, the author asserts, would have created a better draft selection then, as it clearly will do now. Heroes of the Hardcourt will finally lay to rest all the debates as to who the best players are in the history of professional basketball, and who is the all-time greatest.

Keith Thompson is a graduate of Columbia University's Graduate School of Business, and possesses graduate degrees in both Economics and Business Strategy. His professional experiences include over five years as a Researcher and Business Analyst, and nearly a decade as a College Professor teaching Economics and Business courses to undergraduates at Mercy College and Bronx Community College, both in New York. His life-long research interests include accurately measuring performance, and after creating the Performance Efficiency Rating (PER) sports methodology in 1996 to better measure athletic performance, and consult on player draft and free-agency acquisition strategies - he established PER Sports, Inc. He is currently President of this sports analytics-consulting firm Keith Thompson has also written numerous freelance articles in various economic and business newspapers, as well as a number of unpublished articles on social, financial, educational, and sporting concerns. In addition, he has developed an extensive methodology covering two other major American professional sports (both based on the PER system), thus underlining his comprehensive understanding of the sporting environment. Books based on those sports are expected to be published next year in the form of Diamond Defenders: Ranking the Major League's 100 greatest baseball players of all-time, and Gridiron Gladiators: Ranking the 100 greatest football players of all-time. Finally, drawing upon his strong economic and business background, and coupling that with his extensive knowledge of sports he expects to complete a book in early 2007 entitled Play Ball: The Business and Economics of Sports in America today, to analyze the current business environment of professional sports.