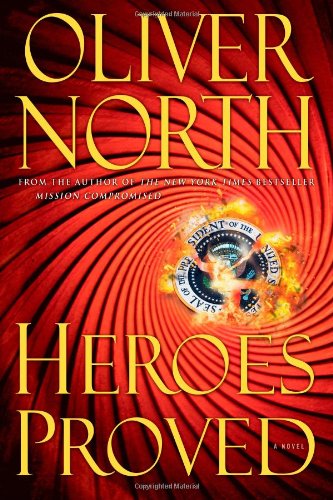 A first edition, with a full number line. This is a specially bound edition signed by the author, with a certificate of authenticity for the signature. Hard to tell from new. We put tracking on every shipment. Bookseller Inventory # 29860

The New York Times bestselling, “heart-thumping” (Sean Hannity) espionage thriller from #1 bestselling author Oliver North offers an epic tale of America’s future in the year 2032, about the kidnapping of a prominent physicist who knows too many state secrets for the president’s liking—especially in a re-election year.

The kidnapping of Martin Cohen, an MIT physicist who is privy to sensitive scientific information, from a Houston energy conference by Islamic terrorists sparks a high stakes game of international cat and mouse.

The NRA has been outlawed; the US military has been gutted; Conservative Christians, dubbed ANARKS, have been labeled a global conspiracy and have been largely driven underground. The Caliphate is now a superpower, residing in Israel. The White House is occupied by a repressive Progressive regime, obsessed with the upcoming presidential election.

Peter Newman, security consultant and former decorated war hero, is determined to rescue Cohen. The president, fearful that her reelection will be endangered by the reemergence of terrorism, will stop at nothing to keep the kidnapping a secret. The White House condemns the kidnapping as the work of ANARKS, then has the authorities brand Newman an ANARK. Newman is thus forced to evade the law while also preparing to rescue the kidnap victim with the help of his father—also a decorated war hero—along with a patriotic US senator and a band of special forces operatives.

Oliver North is a combat-decorated US Marine and recipient of the Silver Star, the Bronze Star for valor, and two Purple Hearts for wounds in action. From 1983 to 1986, he served as the US government’s counterterrorism coordinator on the National Security Council staff. President Ronald Reagan described him as “a national hero.” A New York Times bestselling author of both fiction and nonfiction, he is also host of the award-winning documentary series War Stories on Fox News. North lives with his wife, Betsy, in Virginia. They have four children and sixteen grandchildren. Visit him on Facebook and Twitter, or learn more at OliverNorth.com.