Items related to The History of Central Asia, Volume 3: The Age of Islam...

Home Baumer, Cristoph The History of Central Asia, Volume 3: The Age of Islam and the ...
Stock Image 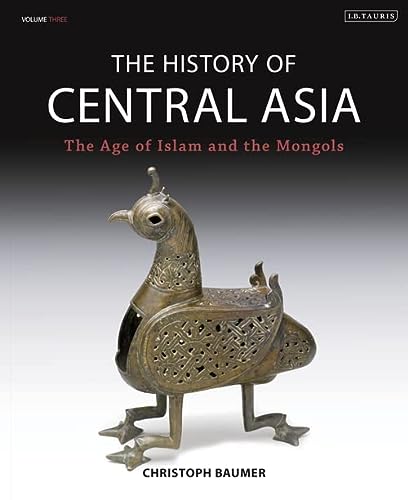 The History of Central Asia, Volume 3: The Age of Islam and the Mongols

Between the ninth and the fifteenth centuries, Central Asia was a major political, economic and cultural hub on the Eurasian continent. In the first half of the thirteenth century it was also the pre-eminent centre of power in the largest land-based empire the world has ever seen. This third volume of Christoph Baumer's extensively praised and lavishly illustrated new history of the region is above all a story of invasion, when tumultuous and often brutal conquest profoundly shaped the later history of the globe. The author explores the rise of Islam and the remarkable victories of the Arab armies which - inspired by their vital, austere and egalitarian desert faith - established important new dynasties like the Seljuks, Karakhanids and Ghaznavids. A golden age of artistic, literary and scientific innovation came to a sudden end when, between 1219 and 1260, Genghiz Khan and his successors overran the Chorasmian-Abbasid lands. Dr Baumer shows that the Mongol conquests, while shattering to their enemies, nevertheless resulted in much greater mercantile and cultural contact between Central Asia and Western Europe.

Christoph Baumer - a leading explorer and historian of Central Asia, Tibet and China - has written several well-received books in the fields of history, religion, archaeology and travel. These include The Church of the East: An Illustrated History of Assyrian Christianity, Traces in the Desert: Journeys of Discovery across Central Asia and China's Holy Mountain: An Illustrated Journey into the Heart of Buddhism, all published by I.B.Tauris. His magisterial four-volume study of Central Asia began in 2012 with volume 1, The History of Central Asia: The Age of the Steppe Warriors, and continued in 2014 with volume 2, The Age of the Silk Roads. The final volume will publish in 2018.