Items related to History of Old Pendleton District and A Genealogy of... 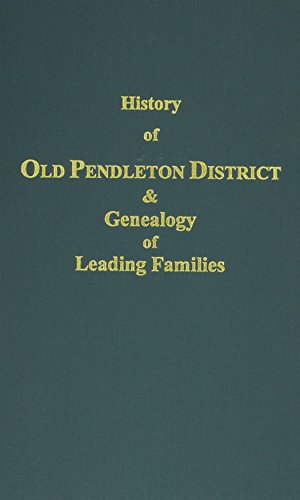 Title: History of Old Pendleton District and A ...

At the close of the Revolutionary War, all the territory embraced in the present counties of ANDERSON, GREENVILLE, PICKENS, and OCONEE belonged to the Cherokee Indians. By an Act of March 1783, this territory was attached temporarily to the adjoining counties of Abbeville, Laurens, and Spartanburg. Pendleton County, as afterwards established, was attached to Abbeville County and for the time being was in the judicial district of Ninety-Six. In 1789 this former Indian land was divided with part being laid off into a county called Pendleton and the other Greenville County.
The major portion of this book is devoted to detailed genealogies of many of the families/individuals of this district such as: Adams, Adger, Anderson, Bee, Bellotte, Benson, Blassingame, Bowen, Broyles, Burns, Burt, Calhoun, Cornish, Craig, Davant, Davis, Dickinson, Dickson, Dupree, Earle, Gaillard, Gibbs, Hall, Hamilton, Hanckel, Harrison, Hastie, Hayne, Hubbard, Hunter, Jenkins, Latta, Ligon, Lorton, Martin, Mavrick, Mays, McBryde, McElhenny, Miller, Newton, North, Owen, Pickens, Pike, Pinckney, Poe, Potter, Randell, Reese, Robinson, Ross, Scott, Seaborn, Shanklin, Shaw, Simpson, Sitton, Sloan, Smith, Steel, Stevens, Stirling, Symmes, Taliaferro, Taylor, Thompson, Trescott, Warley, Watkins, Whitefield, and Whitner. Many of these families and individuals were from Pennsylvania, Maryland, Virginia, and North Carolina, as did many of the wealthy residents of the low-country of South Carolina.