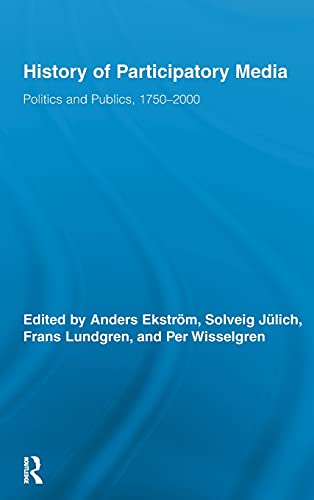 This book argues for a historical perspective on issues relating to the notion of participatory media. Working from a broad concept of media – including essays on the 19th century press, early sound media, photography, exhibitions, television and the internet – the book offers a broad empirical approach to different modes of audience participation from the mid 19th century to the present. Using the insights from the historical case studies, the book also explores some of the key concepts in discussions on the politics of participation, arguing for a theoretical perspective sensitive to the asymmetries that characterize the distribution of agency in the relationship between media and users.

Scholarly discussions on participatory media now occur in several fields. This book argues that all of these discussions are all too often obscured by a rhetoric of newness, assuming that participatory media is something unique in history, radical and revolutionary. By challenging the historiography implicit in this rhetoric, the book also engages in a discussion of issues of more general relevance to the multidisciplinary field of media history.

Anders Ekström received his PhD from Uppsala University in 1994, and is currently working as an associate professor at the Divison of History of Science and Technology at the Royal Institute of Technology, Stockholm, Sweden. He has published four monographs, three edited volumes, and a number of book chapters and articles. Among his most recent publications are articles in journals such as Early Popular Visual Culture and Nineteenth-Century Contexts.

Solveig Jülich received her PhD from Linköping University in 2002, and is currently working as an assistant professor at the Department of Literature and History of Ideas, Stockholm University. She has published one monograph, two edited volumes, and several book chapters and articles. Her most recent publication is Cultural History of Media (in Swedish).

Frans Lundgren received his PhD from Uppsala University in 2003, and is currently working as an assistant professor at the Department of History of Science and Ideas at Uppsala University, Sweden. He has published one monograph, one edited volume, and a number of book chapters and articles. In addition, he has translated a book from English to Swedish.

Paul Wisselgren is Assistant Professor in the Department of Sociology at Umeå University, Sweden. His earlier publications include two books, an edited special issue and some twenty articles, most of them related to different aspects of the social and cultural history of the social sciences.