Home Douglas Adams The Hitchhiker's Guide to the Galaxy, The Complete Radio Series 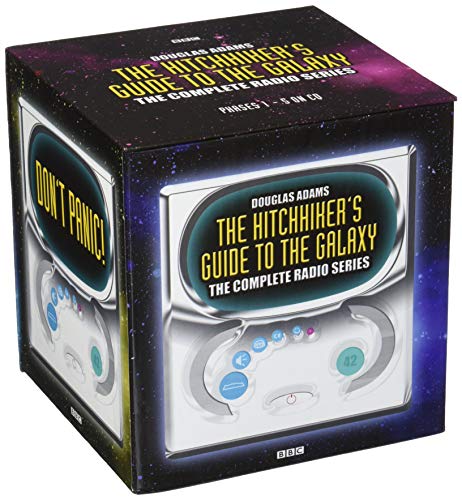 The Hitchhiker's Guide to the Galaxy, The Complete Radio Series

This really is the ultimate answer to Life, the Universe, and Everything—all five radio series of The Hitchhiker's Guide to the Galaxy collected together for the first time, in a handsome box with magnetic lid. From the original Primary and Secondary Phases, through to the more recent Tertiary, Quandary, and Quintessential Phases, these are the adventures of Arthur Dent, Ford Prefect, Zaphod Beeblebrox, and their assorted human, robotic, and alien companions. These full-cast BBC Radio 4 dramas star Simon Jones, Peter Jones, Geoffrey McGivern, Mark Wing-Davey, Stephen Moore, and Susan Sheridan, with a stellar guest cast including John le Mesurier, Joanna Lumley, Christian Slater, Jackie Mason, Sandra Dickinson, Rula Lenska, Griff Rhys Jones, and Jonathan Pryce. Also included is an exclusive bonus disc containing two programs from the BBC Archive: Kaleidoscope from 1980 (going behind the scenes of the second series) and Six Characters in Search of an Answer: Arthur Dent from 2002.

About the Author: Douglas Adams was born in 1952. He is best known as the creator of The Hitch Hiker's Guide to the Galaxy, which started life as a BBC Radio 4 series. He followed this success with The Restaurant at the End of the Universe; Life, The Universe and Everything; So Long and Thanks for all the Fish; Mostly Harmless; and many more. Douglas died in 2001.

1. The Hitchhiker's Guide to the Galaxy, The Complete Radio Series