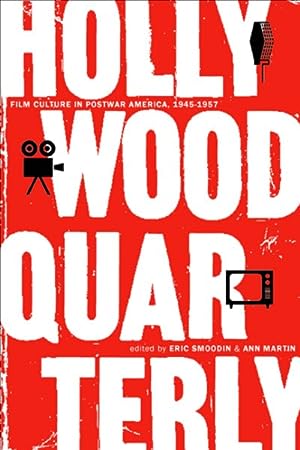 Quantity: 2
View all  copies of this book
Buy New
Price: US$ 26.88 Convert Currency
Shipping: US$ 2.64 Within U.S.A. Destination, rates & speeds
Add to basket

The first issue of Hollywood Quarterly, in October 1945, marked the appearance of the most significant, successful, and regularly published journal of its kind in the United States. For its entire life, the Quarterly held to the leftist utopianism of its founders, several of whom would later be blacklisted. The journal attracted a collection of writers unmatched in North American film studies for the heterogeneity of their intellectual and practical concerns: from film, radio, and television industry workers to academics; from Sam Goldwyn, Edith Head, and Chuck Jones to Theodor Adorno and Siegfried Kracauer. For this volume, Eric Smoodin and Ann Martin have selected essays that reflect the astonishing eclecticism of the journal, with sections on animation, the avant-garde, and documentary to go along with a representative sampling of articles about feature-length narrative films. They have also included articles on radio and television, reflecting the contents of just about every issue of the journal and exemplifying the extraordinary moment in film and media studies that Hollywood Quarterly captured and helped to create.

In 1951, Hollywood Quarterly was renamed the Quarterly of Film, Radio, and Television, and in 1958 it was replaced by Film Quarterly, which is still published by the University of California Press. During those first twelve years, the Quarterly maintained an intelligent, sophisticated, and critical interest in all the major entertainment media, not just film, and in issue after issue insisted on the importance of both aesthetic and sociological methodologies for studying popular culture, and on the political significance of the mass media.

"The Hollywood Quarterly was so far ahead of its time it seems eclectic even today. Contributors to the journal routinely ranged from those who actually made movies (producer Samuel Goldwyn, animator Chuck Jones, and legendary costume designer Edith Head) to those in academia who were at the time only beginning to comprehend the significance of cinema to 20th-century culture (theorist Theodor Adorno and a who's who of early film studies: Siegfried Kracauer, Lewis Jacobs, and Georges Sadoul). This anthology offers invaluable insight into the early history of film scholarship, education, and perhaps most importantly, industry relations at a most crucial time in motion picture history."―Jon Lewis, author of Hollywood v Hard Core: How the Struggle over Censorship Saved the Modern Film Industry

"The Hollywood Quarterly has a legendary status among film and media historians. It was an important journal in postwar America for its trenchant analysis of forms of communication and new media (radio, television, as well as cinema). An illustrious array of writers contributed and gave it a visibility and importance beyond typical scholarly journals. The anthology includes major figures in the history of film study and also well-known practitioners of the art of cinema."―Dana Polan, author of Pulp Fiction (BFI Modern Classics)

"The Hollywood Quarterly occupies a crucially important place in the history of American film criticism. It stands at the juncture between, on the one hand, an artisanal and (in the best sense) amateur scholarship, and on the other hand, a fully emergent academicism. More than any other journal in this country, it initiates the formal, scholarly study of the cinema as both an industrial institution and an art form."―James Naremore, author of More Than Night: Film Noir in its Contexts