Items related to My Home's in Montana 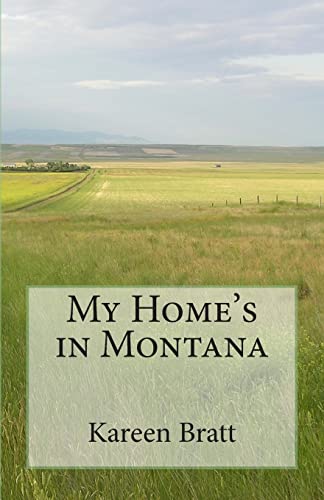 My Home's in Montana

Like new condition. Signed/dated on title page. Copyright page contains ISBN number and nothing else but "". Self-published memoir of growing up near Fort Benton, in North Central Montana, during the 1930-1950s. Bookseller Inventory # 004310

Title: My Home's in Montana

My Home's In Montana - Memoir of a Ranch Family Drama, danger, delight and disappointment draws the reader into an era and a way of life that is nearly unknowable except to the hardy few who still stake their claim to the prairies of Montana. Kareen Bratt's story reaches back into her memories of a family struggling to hold on to their place under Montana's big sky, all the while dealing with hard times, heartbreaking trqagedies and their own human frailties. From a child's point of view, she chronicles the dreams and determination of those who, before her time, came through homesteading, dust bowls, the Great Depression and a World War. These were tough people with good hearts and fearless resolve. Always optimistic and resourceful the family forges on; realistic and resilient. With laughter and tears the writer relays the complications and joys of being at the center of a vibrant community of grandparents, hired men, neighbors and town folk. Growing up on a wheat ranch, without the distractions fo TV or computers, Kareen developed a knack for distilling adult conversations and actions. In this fast moving memoir she relays her adolescent perspective on the byproduct of those observations. She also, with fresh insight, transports the reader into the calculating minds of young children intent on outwitting (at least in the short run) parents, teachers, grandpaarents and even a few neighbor ladies. These were children who lived most of their waking hours outdoors, devising their own entertainment and rules of engagement. Told with the authenticity of one who remembers with great affection, the wind, sky and land of her ranch home, the reader can almost feel the chill of an early morning run to the outhouse or the heat of a harvest kitchen.

Kareen Bratt has lived with a lifelong disappointment; unable to claim that she was "born and raised" in Montana, since her parents drove across the border into Idaho, to the closest hospital, for her birthing. But raised she was, on the prairies of Eastern Montana, next to the Missouri River, awash in the history of homesteading, steamboats, Lewis and Clark and the early days of the state. She and her Midwest husband lived and worked most of their married life in Western Montana, within view of the mountains of Glacier Park and Flathead Lake. They are the parents of three grown children, eight grandchildren and three great grandchildren.

Books from and of the Interior West - we specialise in small-print regional titles especially frontier/homestead era memoirs. We assure our customers immediate, trustworthy service from a brick-n-morter store in northcentral Montana.


We guarantee the condition of every book as it's described on
the Abebooks web sites. If you're dissatisfied with your
purchase (Incorrect Book/Not as Described/Damaged) or if the
order hasn't arrived, you're eligible for a refund within 30 days
of the estimated delivery date. If you've changed your mind
about a book that you've ordered, please use the Ask bookseller
a question link to contact us and we'll respond within 2
business days.


Orders usually ship immediately; within 2 business days at latest. Shipping costs are based on books weighing 2.2 LB, or 1 KG. If your book order is heavy or oversized, we may contact you to let you know extra shipping is required.