Items related to Horses of the Great War: The Story in Art 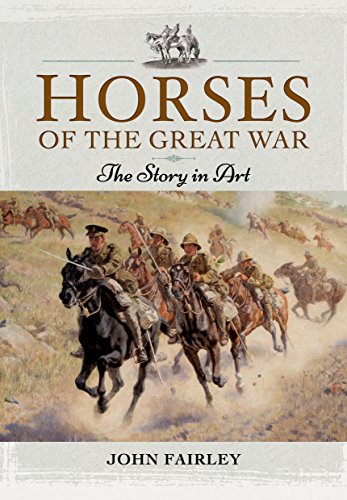 Horses of the Great War: The Story in Art

Title: Horses of the Great War: The Story in Art

Horses of the Great War uses a wide range of superb contemporary paintings to explain the contribution of countless innocent horses to the war effort and victory. These works supported by informed commentary tell how the horses were rounded up from all over the world in their hundreds of thousands; how the cavalry halted the German advance in 1914 and again in 1918; how Australian and Indian swept through the deserts of Palestine and Arabia, overwhelming the Turks and performing incredible feats of endurance.

The Western Front in France and Belgium relied on horses for supply of everything from shells and ammunition to food and water in atrocious and perilous conditions. While the vets kept the suffering horses alive and well, in the end, vast numbers were slaughtered or sold.
All this is reflected in the paintings of distinguished artists such as Sir John Lavery, Sir Alfred Munnings and Stanley Spencer who painted at the front.

The book will appeal beyond those fascinated by the war itself to all those of both sexes and all ages who relate to horses.

John Fairley has written numerous books on equestrian art including The Art of the Horse, Racing in Art and Great Racehorses in Art and is joint author of The Monocled Mutineer, which became a celebrated BBC television series. A noted documentary and sports television producer, he was Director of Programmes at Yorkshire Television. Born in Liverpool, within sight of the Grand National course, he served as an RNVR officer aboard the aircraft carrier HMS Albion. A scholar of The Queen's College, Oxford, he is married, with three daughters, and lives in the Yorkshire racing town of Malton.