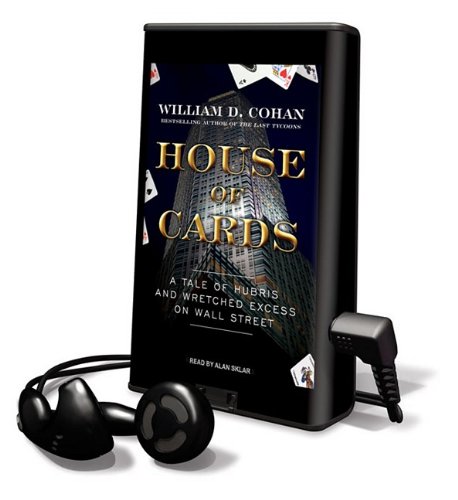 In March 2008, Bear Stearns, a swashbuckling eighty-four-year-old financial institution, was forced to sell itself to JPMorgan Chase for an outrageously low price in a deal brokered by Treasury Secretary Henry Paulson, who was desperately trying to prevent the impending catastrophic market crash. But mere months before, an industry-wide boom had the Bear clocking a record high stock price. How did a giant investment bank with $18 billion in cash on hand disappear in a mere ten days? In this tour de force, Cohan provides a minute-by-minute account of the events that brought America's second Gilded Age to an end. Filled with intimate portraits of the major players, high-end gossip, and smart financial analysis, House of Cards recounts in delicious narrative form the dramatic events behind the fall of Bear Stearns and what it revealed about the financial world's progression from irrational boom to cataclysmic bust. House of Cards is the Rosetta Stone for understanding the dramatic and the unprecedented events that have reshaped Wall Street and global finance in the past two years.

WILLIAM D. COHAN, a former senior Wall Street investment banker, is the bestselling author of The Last Tycoons and the winner of the 2007 FT/Goldman Sachs Business Book of the Year Award. He is an online columnist for The New York Times, and writes frequently for Vanity Fair, Fortune, ArtNews, The Financial Times, the Washington Post and the Daily Beast.  He also appears frequently on CNN, Bloomberg TV and CNBC, and also on numerous NPR shows.