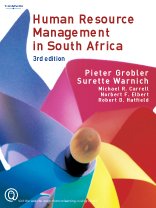 Grobler and Warnich's market-leading text has long been regarded as the most comprehensive and user-friendly book available for those studying Human Resource Management in South Africa. Written from a business management perspective, it not only addresses the traditional core Human Resource activities but also provides the reader with insight into future Human Resource challenges.

Dr. Carrell is Dean of the College of Business at Northern Kentucky University located in the greater Cincinnati area. He received his doctorate from the University of Kentucky, and MBA and B.A. in Economics from the University of Louisville. Most of his professional career has been spent in the Louisville area and has included positions as a personnel director and labor negotiator. These positions enabled him to build a sizable management consulting practice while teaching at the University of Louisville. In addition, he was elected to the City of Louisville Board of Aldermen for five terms, and served as President of the Board and Mayor Pro-tem for three terms. Dr. Carrell has held academic positions at California State University, Bakersfield; The University of Nebraska-Omaha, Marshall University, Morehead State University, and the University of Louisville. He has authored over 50 scholarly works in some of the leading management and human resource journals including The Academy of Management Journal, The Academy of Management Review, Organizational Behavior and Human Performance, Personnel Journal, The Personnel Administrator, HR Magazine, Labor Law Journal, Business Forum, Personnel, The Journal of Accountancy and Training, and Public Personnel Management. Books published by Dr. Carrell are in the fields of collective bargaining and labor relations, organizational behavior, Human Resource Management, and negotiations. During his academic career he has received awards for both outstanding research and teaching. Dr. Carrell has been actively involved in AACSB for over twenty years and has served on accreditation peer review teams for both AACSB and SACS. He also served on the AACSB Visitation Committee and the AACSB Precandidacy Committee. In 2003 he served as Vice-President of the Mid-Continent East AACSB, and in 2004 he served as President of the Mid-Continent East AACSB.


Payment in full prior to despatch of merchandise. sole proprietor.