Items related to Hump: True Tales of Sex After Kids 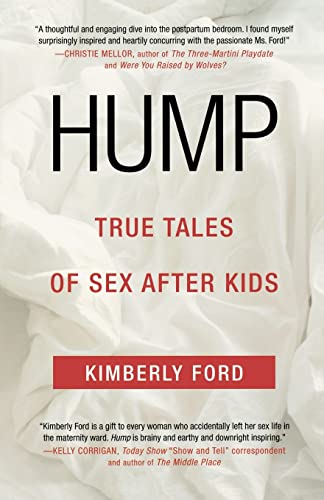 "Kimberly Ford is a gift to every woman who accidentally left her sex life in the maternity ward. Hump is brainy and earthy and downright inspiring."―Kelly Corrigan, author of The Middle Place

Hump puts the lie to the conventional wisdom that once your children are born, your sex life dies. Hump is the chronicle of how a wide variety of couples have reclaimed their former, more sexy selves even amid the chaos of households teeming with young children. Hump is organized into thought-providing sections, including chapters such as:
--"Back in the Saddle" (first-time-after-childbirth sex)
--"I touch myself" (self―ahem―explanatory)
--"Snip!" (vasectomies)
--"Snap!" (what happens when the condom breaks)

By turns poetic and informative, Hump will inspire women to reclaim their bodies for themselves and their husbands, and to make sex a priority in their own lives no matter how many scuffed sneakers they have to kick out of the way to make it to bed.

KIMBERLY FORD, as Kimberly Chisholm, has written for The Threepenny Review and Literary Mama, among other publications. She has a Ph.D. from the University of California, Berkeley in Spanish and French Literature. She and her husband, along with their young three children, live near San Francisco.