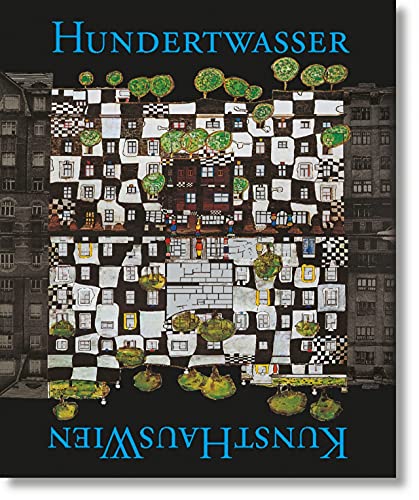 "The architecture of the KunstHausWien is the first bastion against the false order of the straight line, the first bridgehead against the grid system and the chaos of the absurd", wrote Hundertwasser in autumn 1990, as finally a permanent site for his work was found. After four years of conversion work an old furniture factory in Vienna’s third district has become the KunstHausWien, a colourful and exotic addition to Austria’s museum landscape. It has 4000 sq. metres of exhibition space. Two of the four floors house changing exhibitions of international art, while the other two show a permanent exhibition of Hundertwasser’s work.

This MuseumGuide reveals the unique architecture of the KunstHausWien and shows a representative choice of Hundertwasser’s pictures, graphic work, tapestries, architectural models and stamps. It also contains various famous manifestos by the artist, such as "The third skin in the third district", "Window Dictatorship and the Window Right", "Tree Tenants are the Ambassadors of the Free Forests in the City", "Everything situated horizontally in the open air belongs to nature", and "The Uneven Floor".

About the Author: Wieland Schmied (1929–2014) has organized numerous exhibitions and was President of the Academy of Fine Arts in Munich from 1995–2004. He is the author of many books on 19th and 20th century art, including monographs on Caspar David Friedrich, Alfred Kubin, Giorgio de Chirico, Edward Hopper, and Francis Bacon.

Book Description Taschen GmbH, 1999. Paperback. Condition: Good. Previous owners name inside front page. Good condition is defined as: a copy that has been read but remains in clean condition. All of the pages are intact and the cover is intact and the spine may show signs of wear. The book may have minor markings which are not specifically mentioned. Most items will be dispatched the same or the next working day. Seller Inventory # mon0015550098

Book Description Taschen, 2000. Paperback. Condition: Good. Connecting readers with great books since 1972. Used books may not include companion materials, some shelf wear, may contain highlighting/notes, may not include cdrom or access codes. Customer service is our top priority!. Seller Inventory # S_259414654

Book Description Taschen GmbH, 1999. Paperback. Condition: Used; Acceptable. **Simply Brit** Shipped with Premium postal service within 24 hours from the UK with impressive delivery time. We have dispatched from our book depository; items of good condition to over ten million satisfied customers worldwide. We are committed to providing you with reliable and efficient service at all times. Seller Inventory # 2812282

Book Description Taschen, 1999. Paperback. Condition: Used; Good. **SHIPPED FROM UK** We believe you will be completely satisfied with our quick and reliable service. All orders are dispatched as swiftly as possible! Buy with confidence! Aloysius Ihezie. Seller Inventory # mon0000177221

Book Description TASCHEN. Paperback. Condition: GOOD. Spine creases, wear to binding and pages from reading. May contain limited notes, underlining or highlighting that does affect the text. Possible ex library copy, will have the markings and stickers associated from the library. Accessories such as CD, codes, toys, may not be included. Seller Inventory # 3167261337

There are 43 more copies of this book