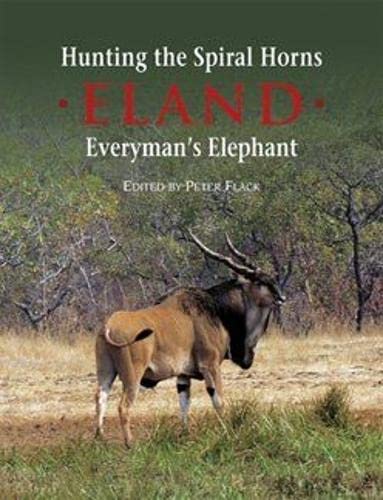 Hunting the Spiral Horns - Eland, Everyman's Elephant, edited by Peter Flack, is the second in a five book series covering all the spiral horns and is designed to be the definitive book on hunting the five sub-species of eland. The first in the series, Hunting the Spiral Horns - Kudu, The Top African Antelope, was launched in January, 2012. The Eland Book is big, over 300 pages long with 350 colour photos and over 40 black and white ones. The list of the 21 hunters and authors who contributed material specially written for the book reads like the Who's Who of eland hunters and includes luminaries such as Craig Boddington, Ivan Carter, Don Cowie, Anthony Dyer, Robin Hurt, Jofie Lamprecht, Kevin Robertson and Tony Tomkinson, to name but a few. The book also includes the exploits of famous hunters of yesteryear such as Lyell, Maydon, Millais, Roosevelt, Selous, Stevenson Hamilton and others, as well as chapters on rifles and ammunition, clothing and equipment and a number of "How To" chapters - given the different terrains in which eland are found - by passionate and very experienced eland hunters. Each story has been especially chosen for the lesson(s) it contains.

Peter Hamilton Flack is a South African lawyer, businessman and conservationist. He studied and worked as a corporate lawyer in the United Kingdom, the United States and South Africa. In his mid thirties, he changed careers and became the CEO of the largest mining contracting company in Africa and, ten years later, accepted an offer to lead one of the world's largest gold mining groups. After retiring from mining, he and two partners formed what was to become the leading[citation needed] turnaround company in Africa. Flack is an active life member of hunting and conservation organisations on three continents and a trustee of WWF Southern Africa. He has been married to Jane for 40 years. They are the parents of Lisa, Troydon (son-in-law), Richard and Eileen (daughter-in-law).