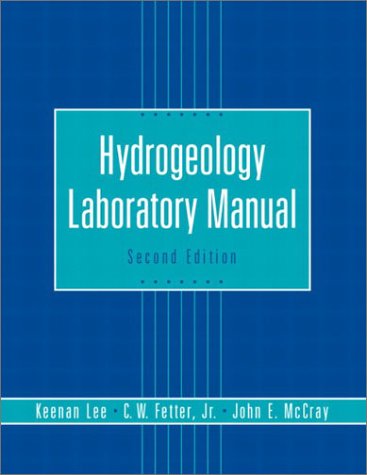 This lab manual features a hands-on approach to learning about the physical and chemical processes that govern groundwater flow and contaminant movement in the subsurface. It will aid users in developing a deeper understanding and appreciation for the science and art of hydrogeology. Twenty-one lab exercises provide practical material that explore regional aquifer studies, slug tests, and the use of tracers to determine aquifer and contaminant parameters and modeling retardation, biodegradation, and aquifer heterogeneity, and much more. For individuals interested in the study of hydrogeology.

This manual is designed for use in the laboratory portion of an undergraduate course in hydrogeology or groundwater engineering. At CSM, these exercises are used in a three-hour lab that accompanies three lectures per week for one semester.

Most of the lab exercises can be used in any sequence, but they should be coordinated with lectures because they both supplement and complement lecture topics in hydrogeology. Two of the labs should be done in a laboratory that has water and sink drains, where you will be working with apparatus to measure hydraulic properties of porous media. One lab period will be spent observing an aquifer test in the field.

Several of the labs incorporate tasks that are best performed on personal computers, and the three contaminant labs are best run in a computer lab unless students have portable computers. Data files are provided on the enclosed CD that can be input to spreadsheet programs for easier calculation. The numerical model PARTICLEFLOW (used in Lab 15) requires a computer.

The final labs consist of an extended problem that should be spread over three lab periods. There are two choices of problems for this capstone mini-project: (1) The Seymour Hazardous Waste Site problem is a structured series of three labs that deals with the hydrogeology of a contaminated aquifer in the humid midwestern United States; (2) the Groundwater Basin Analysis is a quite open-ended problem, with emphasis on determining the interaction of surface water and groundwater in an arid area and predicting the future of irrigation in the basin.

Some of the exercises used in the Manual have been so modified over the years that it's difficult to recognize their origins, but parts of some of the exercises are based on material from colleagues at CSM and Stanford University. I thank the students and teaching assistants who helped test and refine these exercises. The Manual was improved considerably by helpful criticism provided by Professors Regina M. Capuano, University of Houston; David Huntley, San Diego State University; James A. Saunders, Auburn University; H. Leonard Vacher, University of South Florida; and several anonymous reviewers.

A complete hydrogeology course should include a lab as well as lecture. Until now, faculty members have been forced to develop their own custom lab manual, as no commercial manual was available. I was excited to learn of Keenan Lee's plans to publish a hydrogeology lab manual, and I was especially pleased when he invited me to contribute lab exercises from the Seymour Recycling Corporation hazardous waste site.

Hydrogeology is best learned through a hands-on approach. The material in this lab manual, in combination with the end-of-chapter problems found in textbooks, will aid students in developing a deeper appreciation for the science and art of hydrogeology.

The three new contaminant transport labs, along with the exercises for the Seymour hazardous waste site, are intended to complement today's hydrogeology courses. Each of these laboratory exercises also includes computer modeling.

I would like to thank Dr. Paul Hseih, of the U.S. Geological Survey, for providing the model PARTICLEFLOW used in Lab 15. This model is very simple to use, but it is considerably more complex behind the computer screen. Special thanks also go to Kyle Murray, a doctoral student at CSM, for designing the slug-test exercise and for critiquing the contaminant-transport exercises. Finally, Keenan Lee greatly improved the user-friendliness of these new exercises by applying his wealth of teaching experience to the original drafts.

NOTE TO USERS OF THE FIRST EDITION

The manual now contains 21 lab exercises, six of which are new. The new labs include two regional aquifer studies, one in Colorado and one on the Gulf Coast, one aquifer-testing lab using slug tests, and three contaminant-transport labs dealing with use of tracers to determine aquifer and contaminant parameters and modeling retardation, biodegradation, and aquifer heterogeneity.

All material in the first edition is retained in the second edition, although some of it has been moved to the enclosed CD. One original lab exercise, all supplemental problems, and three of seven appendices have moved to the CD.

An Instructor's Manual is available at no cost from Prentice Hall.

Book Description Prentice Hall PTR, 2002. Condition: Good. 2 Edition. Shows some signs of wear, and may have some markings on the inside. Seller Inventory # 16421904-6

Shipping: US$ 34.56
From Spain to U.S.A.
Destination, rates & speeds
#renderBDPScripts()