Items related to Hypnerotomachia Poliphili: The Strife of Love in a... 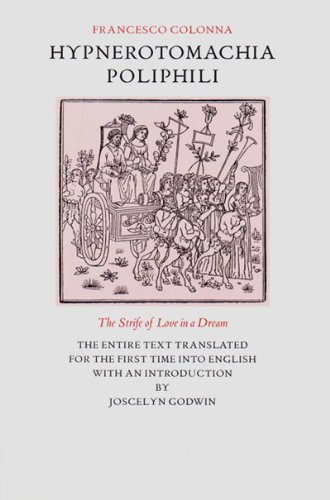 Hypnerotomachia Poliphili: The Strife of Love in a Dream

Title: Hypnerotomachia Poliphili: The Strife of ...

The first, complete, English-language translation in five hundred years of one of the world's most compelling fantasies. It is hard to believe that one of the most famous books in the world, the Hypnerotomachia Poliphili, read by every Renaissance intellectual and referred to and revered in studies of art and culture ever since, has never appeared in full in English. One reason, no doubt, is the length and difficulty of the text. It is a strange, pagan, pedantic, erotic, allegorical, mythological romance relating in highly stylized Italian the quest of Poliphilo for his beloved Polia. The author (presumed to be Francesco Colonna, a friar of dubious reputation) was obsessed--one might say sexually obsessed--by architecture, and the book's 174 woodcuts are a primary source for Renaissance ideas on both buildings and gardens. In 1592 a beginning was made to produce an English version but the translator gave up part way. Now, at last, the task has been triumphantly performed by Joscelyn Godwin, who succeeds in reproducing all the wayward charm and arcane learning of the book in language accessible to the modern reader. Printed in the same size and format as the original, the book includes all the woodcuts and has a substantial introduction by Professor Godwin. Its appearance is a publishing event, filling a notorious gap in every academic library, in the collections of scholars, and on the bookshelves of everyone interested in the history of Western culture.

Joscelyn Godwin is Professor of Music at Colgate University. He has made a considerable contribution to occult philosophy through his books on the seventeenth-century mystical writers Robert Fludd and Athanasius Kircher, as well as on the mystery religions of the ancient world and on the spiritual dimension of music.