Items related to INFERNUM: THE ART OF JASON ENGLE 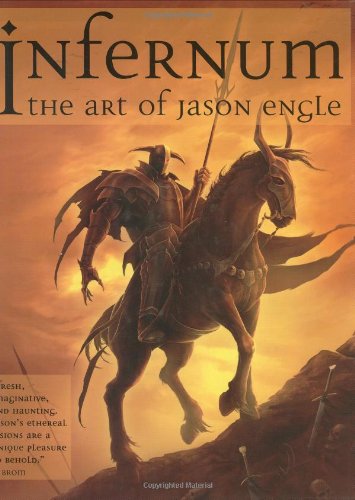 INFERNUM: THE ART OF JASON ENGLE

“Fresh, imaginative, and haunting, Jason’s ethereal visions are a unique pleasure to behold.”—Brom

A fabulous and evocative collection of images from an emerging young creator of fantasy art who’s making a big name for himself. Not only does Jason Engle’s website, jaestudio.com, receive more than 2 million hits per month, but Engle can count major figures from the world of science fiction illustration as fans—including Brom, Todd Lockwood, and Matt Stawicki. Engle’s work, an unusual mix of traditional media and modern digital paint techniques, has won critical acclaim in online galleries, including top honors at DigitalArt.org and the Editor’s Choice Award at Epilogue.net. The selections here all feature his signature use of color, his graceful and ethereal figures, and powerful, otherworldly atmosphere.

Since starting his own company, Innovative Studios, at the tender age of 19 Jason Engle has made a huge impact on the fantasy industry - and can count the likes of Brom, Todd Lockwood and Matt Stawicki as fans of his work.

Kathmandu Books specializes in Modern First Editions with an emphasis on Science Fiction, Fantasy, Mystery, Fiction and Literature. We can also special order books including most small press titles in the U.S. and U.K. Want Lists Accepted.